Katharine Gorka is the author wife of Hungarian-American intelligence analyst, Sebastian Gorka. Her husband was hired under Trump’s administration as a member of the national security advisory staff of the United States.

Katharine’s husband has been a controversial figure for some time. He is currently under fire following an interview in which he said ‘getting dirt is what political campaigns do.’

This isn’t the first time Gorka gets in trouble. Back in May, reports surfaced saying Gorka was under pressure over his links to Hungarian far-right groups and that he could be leaving the White House.

He also was unable to get clearance for the national security council after he was charged last year with carrying a weapon at Ronald Reagan Washington national airport.

Gorka, who is in his 40s, was born in London to Hungarian parents who had fled during the country’s 1956 failed anti-Soviet revolution. Prior to immigrating to the United States, Gorka had mounted an unsuccessful political career in Hungary and, in doing so, once expressed support for a far-right militia in the country.

His wearing of a medal awarded to his father by the Hungarian group Vitezi Rend – or Order of Heroes – at the inaugural ball for the president raised eyebrows. The group, which was anti-Soviet, has been linked by some to **** colluders.

Gorka and his wife, Katharine, have both been linked to the Vitezi Rand as well as other ties to the Hungarian right and anti-Muslim diatribes. The couple which was married in 1996 moved to the US in 2008. Sebastian previously worked as a former counterterrorism analyst for Fox News.

He also worked for the FBI but was fired for his over-the-top Islamophobic rhetoric. 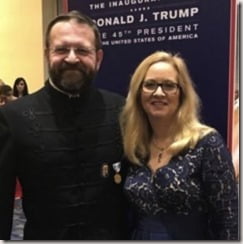 Katharine Gorka is an official at the Department of Homeland Security. According to her LinkedIn, Mrs. Gorka graduated from the University of North Carolina at Chapel Hill and received a master’s degree in international political economy from the London School of Economics.

She previously worked as the regional director in Budapest of the National Forum Foundation. She was also a senior fellow at the World Policy Institute in New York. Until 2014, she served as the executive director at The Westminster Institute.

She is currently listed as the president of a non-governmental association called the Council on Global Security. And the principal of Threat Knowledge Group, a consulting firm.

Accoridng to their wedding announcement, she is the former Katharine Fairfax Cornell originally from Virginia. The couple tied the knot at St. Michael’s Roman Catholic Church in Sopron.

Her father, Mortimer Ryon, served as the president of Cornell Iron Works in Mountaintop, Pennsylvania.

Katharine and her hubby are frequent collaborators. Before joining the Trump transition, Katharine Gorka was a contributing author to Breitbart.

Katharine and Sebastian are the parents of two children, son Paul and a daughter; Julia.