Zeinab Soleimani is one of two adult daughters of Qassem Soleimani -the commander of the Iranian Revolutionary Guards Corps’s Quds Force, who was the most successful military figure of his time.

Her father, Qassem Soleimani was killed in an airstrike in Iraq January 3, 2020 ordered by President Trump.
Zeinab Soleimani who is believed to have four more siblings, one sister and three brothers -all survive their father -however, little is known about their existence even though their father was hailed as a hero in Iran.

62-year-old Qassem Soleimani, was responsible for the destabilization and inflammation of sectarian tensions that Iran has sown throughout the Middle East. Soleimani was begrudgingly considered by his adversaries to be a brilliant strategist due to his pioneering of Iran’s asymmetrical warfare doctrine. 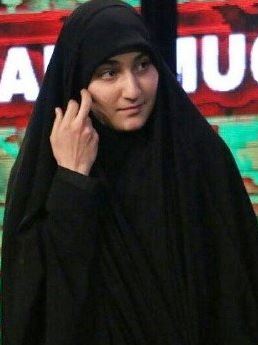 Born into an impoverished village in the southeastern province of Kerman, as one of six children, Soleimani is believed to have had only a high school education and survived on meager construction jobs in the city to make ends meet, at one point delving into fitness training and rising up the ranks in karate.

Known as Iran’s “shadow commander,” in 1998, he was appointed to the most sensitive and esteemed position as the Major-General of the Quds Force. It wasn’t until the Syrian Civil War next door, with his staunch backing of the Shia-dominant Assad government, that ignited in 2013, that he suddenly came reluctantly to the limelight.

Little is known about Soleimani’s personal life, other than he is reported to have three sons and two daughters. According to a 2014 Weekly Standard report, one of his daughters is married to the son of former Tehran mayor Mohammad Baquer-Qalibaf.
Names of his family are not disclosed, but Iranian sources told Fox News that his daughters’ names are Zeinab Soleimani and Leila Soleimani. His mother-in-law’s name is Zahra Agha-Ali, and his wife goes by Faati – short for Fatimah, all of whom lead very quiet lives.
In 2016, Zeinab Soleimani was spotted alongside Fatima Mughniyah, Emad Mughniyah’s daughter. They both spoke out amongst high ranked crowd of men during a resistance conference in Iran.