Daniel Sprague is a retired NYPD officer who was left with a nasty bruise on his birthday after a total stranger though he was wearing a MAGA hat.

Sprague talked about the incident on social media saying a woman punched him in the face, left it ****** on his birthday all because of a red cap that looks like a MAGA hat.

However, the birthday fella wrote on Facebook that he was celebrating his 50th birthday and that the hat actually red, ‘MAKE FIFTY GREAT AGAIN’
Sprague also said he was out presicesly celebrating his big day -with friends and family at The Stage on Broadway on Friday when he was assaulted by a woman he didn’t know. The retired cop said a woman punched him in the face. The incident took place in Nashville over the weekend.

Daniel Sprague wrote on Facebook “A misguided soul possibly not alone, who I’m assuming was not very literate, spun me around, punch [sic] me in the face and grabbing [sic] my hat while she was yelling ‘how dare you’ leading me to think she thought it was a MAGA hat” 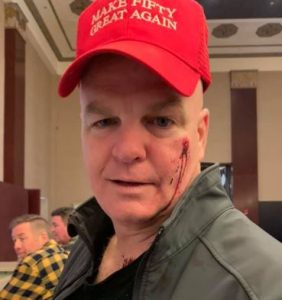 Sprague who filed a report the following day, was also wearing a shirt -which was decorated with an American flag that read “Making America Great Since 1970.”
The end of his big day? He and the woman were both booted from the bar.

50-year-old Daniel Sprague is a former NYPD detective, he is a Staten Island resident. He serves as co-chairman of the NYPD With Arms Wide Open organization. In a post for the group, Daniel Patrick Sprague opens up about his youngest son, Owen being born with Down Syndrome. He and his wife Kerry Marie, are the parents of three other young children.