Marie Louise Gorsuch is the lovely wife of Court of Appeals judge, Neil Gorsuch. Her husband has been nominated by president Trump to become an Associate Justice of the Supreme Court.

Marie’s husband was born Neil McGill Gorsuch on August 29, 1967. He could become the youngest justice to join America’s highest court since William Rehnquist in 1971. He would be replacing the late Antonin Scalia.

Gorsuch, a Colorado native, was born to mother Anne Burford. His mother is known as the first woman to head the Environmental Protection Agency, serving during the Reagan administration.

Neil Gorsuch attended Columbia University as an undergraduate, and received his doctorate in legal philosophy as a Marshall Scholar at Oxford University.

According to his University of Colorado bio, he spent several years in private practice and worked in George W Bush’s Justice Department. He clerked for not one but two supreme court justices, first Byron White and later Anthony Kennedy.

Later appointed to his current post -judge on the 10th US Circuit Court of Appeals –in 2006 by Republican president George W Bush.

He has been married to his college sweetheart for several years. If you’re wondering who was the gorgeous lady standing proudly next to Neil at the January 31 press conference when Trump chose him to replace Antonin Scalia. 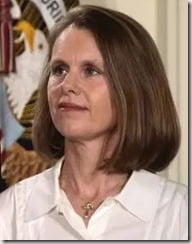 PinMarie Louise Gorsuch is originally from the United Kingdom. She was born March 17, 1968.

She met her then future husband while attending Oxford University.

Marie who also goes by Louise, is like her husband, an outdoors person. The couple enjoys fishing among other activities. They also raise horses, chickens and goats.

She and her husband are the proud parents of two daughters. Marie Louise Gorsuch first gave birth to Emma in 1999. The second daughter, Belinda was born in 2001.

Mrs. Gorsuch seems to enjoy her privacy and keeps a low profile, but its safe to say she has played an important role in his career. Her husband wrote about her support in his book titled ““The Future of Assisted Suicide & Euthanasia”

I thank my wife, Louise, and my daughters, Emma and Belinda, without whose constant love and attention this book would’ve been finished in half the time – but without whom life wouldn’t been half as fully lived”