Robyn Modly is the wife of Navy man, Thomas Modly -the current Acting Secretary of the Navy.

Robyn’s husband may be in danger of losing his job following comments he recently made. Thomas Modly labeled of stupid to the now-ousted commander of the USS Theodore Roosevelt. Modly later apologized to the Navy for his comment amid calls for his resignation.

Modly graduated from the U.S. Naval Academy in 1983 with a Bachelor of Science, with distinction. Upon graduation he joined the United States Navy and proudly served as an UH-1N pilot and an Assistant Professor of Political Science at the U.S. Air Force Academy. He left active duty in 1990 to attend business school and to pursue a career in the private sector.
He also holds a Master of Arts in Government/International Relations from Georgetown University. In addition, he attended Harvard Business School from 1990 to 1992 where he earned a Master’s in Business Administration. He was sworn in as the Under Secretary of the Navy in 2017.

Thomas Modly has been happily married to his lovely wife, Robyn Payne Modly -for many years. 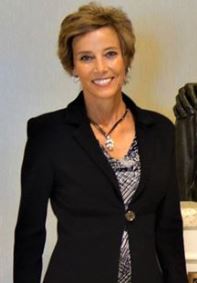 Robyn Modly has been a supportive spouse, for her husband’s 2018 formal swearing in ceremony she and the couple’s children were in attendance.
The Navy spouse has been active herself in some work. Robyn Modly has visited a number of Military and Family Support Center programs and services onboard Joint Base Pearl Harbor-Hickam and Marine Corps Base Hawaii-Kaneohe Bay as part of a spouse program visit to Hawaii.
She spoke with U.S. Sailors and contractors working on the new branch health clinic facility aboard Marine Corps Base Hawaii (MCBH,) during a tour of the base, Jan. 16, 2020. The visit provided Mrs. Modly with insight into MCBH’s assets and its ability to provide a resilient fighting force.
In 2018, she made a visit to Naval Medical Center San Diego (NMCSD), to learn more about its program.

Robyn Modly is the mother of the couple’s four children; Noelle, Zak, Natalie, and Dorian. The family resides in Annapolis.
The couple’s daughter Dorian, went to St. Mary’s High School, Annapolis, MD; and is a student at University of South Carolina.
Natalie Modly studied at University of Oregon and goes by Natalie Schmidt after her marriage to Sam Schmidt.
Noelle Modly who goes by Noelle Ulman, is a student Teacher Supervisor at UVA Curry School of Education & Human Development. Her husband is Crhis Ulman.
Zak Modly has followed his father’s footsteps tanking on a career in the military.