Lucy Turnbull is apparently the delicious wife of Australia’s Prime Minister, Malcolm Turnbull –that according to his French counterpart, Emmanuel Macron.

Macron may have used the wrong wording, however, Lucy Turnbull has certainly had an important role as the Aussies’ first lady and that certainly brings her under the spotlight.

Lucy’s husband is known to be a former journalist, lawyer and businessman. Born October 24, 1954; he graduated from Sydney University with a BA LLB. He won a Rhodes scholarship and completed a further law degree at Oxford.

After a successful career in journalism Malcolm began practicing law in 1980. He left law for business in the late 80’s and has since been responsible for the establishment and success of many Australian businesses. Following a decade’s long career in public service, he was elected the leader of the Liberal Party and Prime Minister in 2015 and was re-elected as Prime Minister of Australia at the Federal Election on 2 July 2016. By his side has been the lovely Lucy Turnbull. 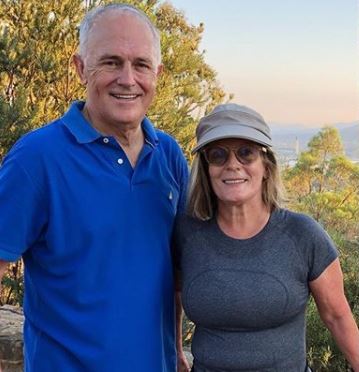 Lucy Turnbull has a long history of public service and commercial success. Lucy was born Lucy Mary Hughes on March 30, 1958. She is the daughter of Tom Hughes, who was Australia’s attorney general from 1969 to 1971. She met Malcolm Turnbull when she was just 19 and he 23 at his father’s office. The two wedded in 1980.

Lucy who studied law, has had quite the successful career and has worn many titles since. You can call her public servant, business woman, philanthropist, mother, wife. She holds a Bachelor of Law form the University of Sydney as well as a Master of Business Administration from the University of New South Wales.

Following her graduation, Lucy worked as a lawyer, was elected a councillor, was named deputy mayor in 19991 and then became the first female lord mayor of Sydney in 2003. In the business sector, she served as chairman of the cancer treatment company Prima BioMed, on the board of the Biennale of Sydney and, as director of the private investment bank Turnbull and Partners.

Lucy who is also a published author finds time to serve on multiple charities’ boards. As a result of her hard work, she was appointed an officer of the Order of Australia.

Lucy who is by nature a private person –is the mother of the couple’s two adult children. Their son Alex was born in 1982 and is followed by his sister, Daisy, born in 1985. Lucy and her husband are also proud grandparent to Jack, Isla, Alice and Ronan.

According to the Guardian, the couple are worth $186m –however Lucy reveals “wealth is not part of any essence of her.”

Check out photos of the couple on Malcolm’s official Instagram.