Patricia’s Democrat husband was found guilty of crimes that included seeking to sell an appointment to Barack Obama’s old Senate seat and trying to shake down a children’s hospital. He was sentenced to serve 14 years in prison and destined to remain behind bars until his projected 2024 release date.

However he may soon see the light of day after president Trump commuted his sentence. Blagojevich who has served 7-years in jail, is expected to walk out of prison later Tuesday. One person to surely be happy to hear the news is his wife of many years, Patti Blagojevich.
He and wife, Patricia Blagojevich have been married for years and she has remained by his side despite his impeachment, conviction and eventual removal from office.

Patricia Blagojevich was born Patricia Mell on April 9, 1965; she is one of two daughters born to former Chicago alderman Richard Mell and his wife, Marge Mell.
Patricia’s younger sister, Deb Mell is also a politician who served in the Illinois State House of Representatives from 2009 to 2013. 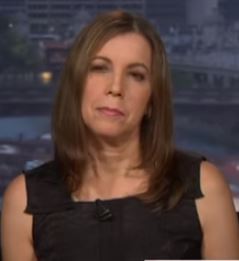 Patricia who goes by Patti, studied at St. Scholastica Academy and later attended the University of Illinois at Urbana-Champaign, where she earned her bachelor’s degree in economics.
After her husband was elected as the governor of Illinois, Patricia Blagojevich took on her role as first lady. During that time she supported the illiteracy eradication initiatives and the Illinois Pediatric Vision Initiative.
Patti, a licensed real estate broker, ran her officer from home called, River Realty. However she had to walk away from her career amid scrutiny from federal agents probing whether clients hired her to win favor from her husband’s administration.

She is currently listed as a Financial Advisor at Investment Navigation LLC.

Patti and her husband are the proud parents of two daughters, Amy and Annie Blagojevich. Amy Margaret Blagojevich attended Northwestern University and also The University of Edinburgh.

After her husband was removed as Governor of Illinois, Patricia Blagojevich appeared as a contestant on the NBC reality show I’m a Celebrity…Get Me out of Here. She placed 4th in the competition. She has since pushed for her husband’s release.