This beautiful lady is Gloria Fonts Suarez; she is the pretty wife of City Commissioner Frank Suarez, the newly Mayor-elect of Miami, Florida.

I think that I can speak for all of you when I say that you don’t want to read about Mr. Suarez, but wouldn’t mind reading a thing or two about his wife, right?

The first thing you need to know is that, Gloria Maria Fonts Suarez, was born on February 13, 1980; to Ernesto and Gloria C. Fonts, ages 65 and 63, respectively.

The second point is that  this stunner happens to be a Miami wedding planner. According to her website, she and friend Cristina Llorente joined forces to create, Cymbidium Events –which offers clients a very detailed understanding of service, operations, and logistics. The third point is that Mrs. Fonts Suarez holds a degree in Hospitality Management from Florida International University and has an extensive industry background. Gloria brings exceptional food and beverage knowledge to all social and corporate events, assisting in menu design and ensuring a true culinary experience for your guests.

Prior to owning her Wedding planning event firm, Gloria worked at the Four Seasons Hotel Miami. Subsequently, started her career as Catering Sales Manager at the Biltmore Hotel. 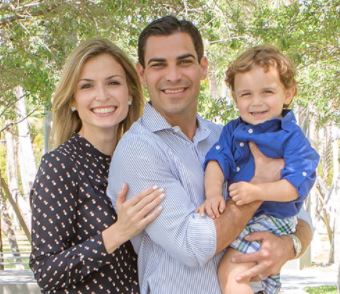 When Gloria Fonts Suarez isn’t busy planning a dream wedding, she spends time with her hubby and only child. Gloria and Frank have been married for the past 10-years and are the proud parents of an adorable three-year-old son named, Andrew.

Back in 2013, her husband who previously made a bid for the mayorship –revealed one of the reasons for ending his campaign was Gloria’s pregnancy since the couple had been trying to have children for years.

Furthermore, Suarez earned an undergraduate degree in finance from Florida International University, then, like his father before him, headed to law school. He graduated from the University of Florida with a Juris doctor in 2004.

In conclusion, you can find the lovely Gloria Fonts Suarez on Facebook here.