Brittany Watts is the stunning wife of politician Eric Swalwell -who serves as the Representative for California’s 15th congressional district.

Last year he announced his run for the White House and soon after he dropped out of the race. Certainly through it all, his wife of a few years has been by his side. 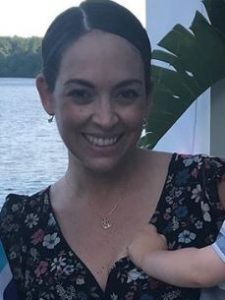 Brittany Watts and Eric Swalwell have been married since 2016, his previous marriage ended in divorce.
The two were married on Oct. 14, 2016. According to their wedding announcement, they were introduced in September 2015 by mutual friends whom the groom had set up 12 years before. Swalwell proposed in March of 2016 at the Greenbrier resort in West Virginia.

She was born Brittany Ann Watts to dentists parents, Dr. Kathryn L. Watts and Dr. H. William Watts III. Both her parents have practices in Columbus, Ind.
Brittany Watts graduated from Miami University in Oxford, Ohio. She is the director of sales for the Ritz-Carlton resort in Half Moon Bay, Calif. The lovely brunette previously served as the Director of Corporate and Leisure Travel Sales at Loews Chicago Hotel.

Since their nuptials, Brittany Watts has given birth to two children Nelson and Cricket, both toddlers. The couple often share images and videos with their adorable children and Eric often praises his wife with posts like

Happy Mother’s Day to my wife, Brittany, the best mom in the world! Nelson & Cricket are lucky to have you as their mom and I’m lucky to have such a strong, incredible, and inspirational wife. We love you!

Find the working mom and political spouse on Instagram here