Johansy’s husband slammed former Mayor Michael Bloomberg for blocking a multimillion-dollar settlement over the group’s wrongful prosecution.
Kevin Richardson now in his 40’s, was one of the five teens wrongly convicted in the horrific 1989 attack of then-28-year-old jogger Trisha Meili.

Former Manhattan District Attorney Robert Morgenthau in 2002 cleared Richardson and four others — Antron McCray, Yusef Salaam, Raymond Santana and Korey Wise — of the vicious rape that left Meili in a coma. DNA evidence also showed serial rapist Matias Reyes committed the crime.
The five sued the city in 2003, demanding $250 million for their wrongful conviction and imprisonment. City Hall paid $41 million to settle the lawsuit in 2014. Their story inspired the Netflix’s series ‘When they see us’

Kevin Richardson was 14 when he was accused of attacking and sexually assaulting the Central Park jogger. Eventually, he was tried as a juvenile and was convicted of attempted murder, rape, sodomy, assault and robbery. After being wrongfully convicted, he was sentenced to five to 10 years in a youth correctional facility and ultimately served six years before being released.

Nowadays, the New Yorker does work for the Innocence Project, advocating for the rights of others who’ve been wrongfully accused. Richardson who works as an advocate for criminal justice reform, and continues to speak about his experiences at various events -is happily married to Johansy Richardson. 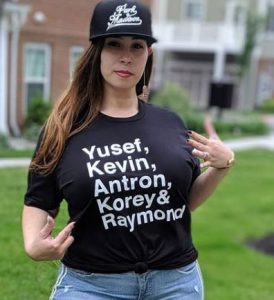 Johansy Richardson and her family are New Jersey residents. The two have been together for years and were officially married in 2016. Johansy Richardson is the mother of a daughter from another relationship, Jaslynne -however, Kevin has adopted her as his own.
Together the couple welcomed a baby girl name Jayla Rose Richardson in 2017.

According to her social media, Johansy Richardson went to George Washington High school, New York, NY. She studied Business at LA GUARDIA COMUNITY COLLEGE and worked at Isabella Home Care. She is currently listed as working at Isabella Center.
Johansy Richardson is a proud wife and fierce supporter of her husband. Find the mom of two on Instagram here.