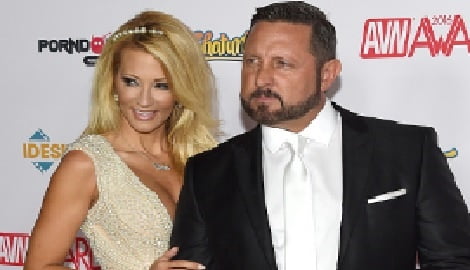 According to reports, The Donald kissed Drake and offered her a big chunk of money for some alone time. This happened years ago and Drake’s answer to the ‘indecent proposal’ was no.

What’s interesting TMZ notes, is that, just one day before coming forward with the accusation, Brad’s wife launched an online sex shop.

Drake even wrote a blog abut the site, which features from lubricants to her own sex videos.

Talking about a creating major publicity!

Drake and her hubby are already a good team when it comes to working together. Brad Armstrong was born Rod Hopkins on September 23, 1965.

He was interviewed for a 2014 story in Cosmopolitan magazine about costume design in adult films.

He and Jessica tied the knot in 2006, they have been married for 10-years. Like her man, Jessica was previously married to Evan Stone. The couple divorced in 2004 after two years of marriage.

Jessica who is also a director and entrepreneur, gained experience working as her hubby’s assistant director on a number of films.

Brad has under his belt over 300 films as performer and over 150 as a director.