Andrew Cray is the late husband of LGBT rights activist and political figure, Sarah McBride. She will now be part of the history books, as McBride became the first transgender woman to speak at a Democratic National Convention.

Sarah McBride, is one of the first openly transgender people to work in the White House. She helped influence the administration’s policy on transgender rights and shared her stories with some of its most influential figures. She currently serves as the National Press Secretary for the Human Rights Campaign.

Her resume includes working for Governor Jack Markell (D-DE) and for former Attorney General Beau Biden (D-DE). Prior to coming to HRC, Sarah worked on LGBTQ equality at the Center for American Progress.

Sarah McBride came out as a transgender woman in 2012. At the time she was serving as student body president at American University.

The native of Wilmington, Delaware, Sarah serves on the Board of Directors of Equality Delaware, the state’s primary LGBT-advocacy organization.

Thanks to the 25-year-old we’ve also come to know her husbands’ story. Sarah who addressed the crowd at the party convention yesterday, didn’t miss the opportunity to pay tribute to Andrew Cray.

The couple married in 2014 after Cray received his terminal diagnose, four days later, Andrew Cray –who according to McBride “never wavered in his commitment to our cause and his belief that this country can change” –died. 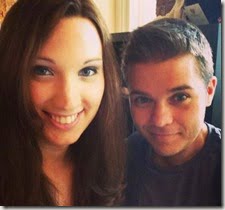 Andre Cray lost his battle to oral cancer, he was 28-years-old. Sarah recalled how the couple met and fell in love and described Cray as a transgender man, fighting for equality. The two met during the Pride reception at the White House in 2012. It was months later that Cray finally asked her out via Facebook.

According to the washingtonblade, Andrew Cray made his transition while attending college at Northwestern University.

He found his calling by attending fellowships for LGBT organizations in D.C. while pursuing his law degree at the University of Michigan.

The Wisconsin native arrived to D.C. determined on working on LGBT policy issues. Among his accomplishments was co-launching Out2Enroll, a project aimed at encouraging LGBT people to sign up for health insurance under the Affordable Care Act.

His cancer diagnose didn’t deter him from his work in making sure LGBT people would be enrolled in health insurance. In fact, he drew on his diagnosis to urge others to get covered.

Andrew Cray was initially diagnosed in September 2013. He underwent surgery and chemotherapy and was told by his doctors his cancer was in remission.

However, sometime later, Andrew began suffering from a persistent cough and chest pains. His cancer had metastasized. Cray died at Johns Hopkins Hospital on Aug. 28, 2014.