Meet Alina Kabaeva; the former Russian Olympic gymnast and rumored girlfriend of Russian president Vladimir Putin, since 2008. More recently is possible that Alina, who hasn’t been seen since 2018, when rumors about pregnancy first emerge, may have given birth to Putin’s twin sons. 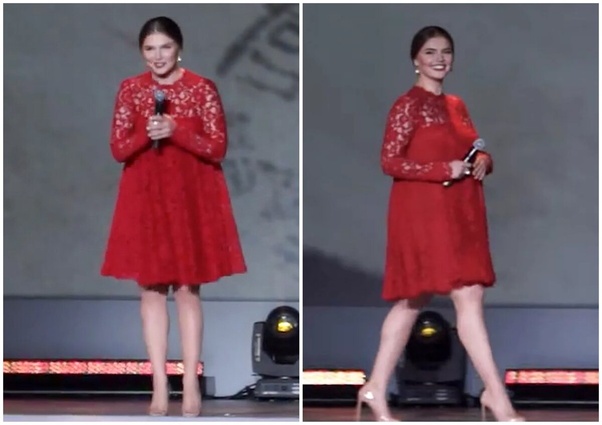 Talks between Putin and his ex-wife Lyudmila allegedly started in 1983; it came to our ears that there is a new lady in the heart of the Russian politician, a much younger lady I must add, her name is Alina Kabaeva and yes, she is the former Olympic gymnast turned politician who is 30 years his junior. 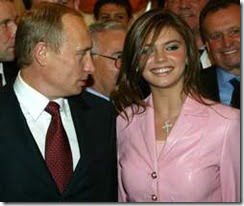 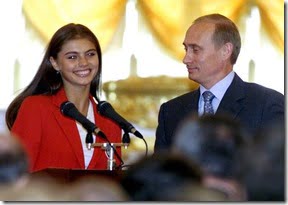 This is not the first time media has reported a story about Alina and Vladimir being involved, the first time came in 2008; not long after that, Russian paper Moskovsky Korrespondent stated that they were engaged. 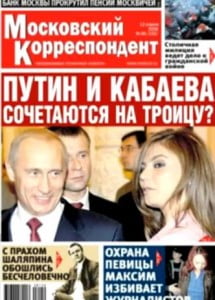 The story was published on April 12, 2008, both denied the allegations Putin said there is not a single word of truth in that story, Alina’s rep called the story nonsense and by October 29, 2008, the Moskovsky Korrespondent was closed on financial grounds, nobody talked a thing about it until the following year when in December 2009 Alina gave birth to her son Dmitri, many believed the boy’s father is Putin, but Alina denied it. 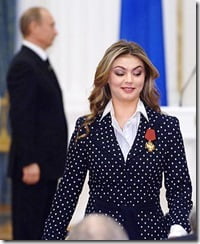 Alina also denied that had given birth to a boy or any child whatsoever.

About Gossip
Dear friends!It is never been my habit to comment on rumours, but I’ve decided to make an exception because I can’t let so many warm words and good wishes go unanswered…On this page I promised to tell you about the most important events in my life and about my family. So when I become a mother (which hasn’t happened yet) I’ll definitely write about it.

Thanks to everyone who has sent congratulations and was worried about me. Only because of all of you, I’ve broken my rule of never paying attention to gossip.

Let’s not forget Alina was romantically involved with the militia captain who moved to Moscow from Georgia in 1996 to apply for a post-graduate course at the Moscow Institute of Law, Shalva a former boxer holds degrees – athletic and legal.

In 2004 Alina and Shalva announced they were getting married, around that time a Russian paper published an interview with Shalva’s wife Olga, mother of his daughter. Shalva and Olga got divorced soon after that but kept in touch eventually Alina and Shalva split up.

Some media talked about the possibility that Putin and Alina will get married now that he is single and free to mingle, I guess only time will tell what is going to happen to these two. But would you like to know more about Vladimir Putin’s rumored girlfriend/ mistress and baby mama? 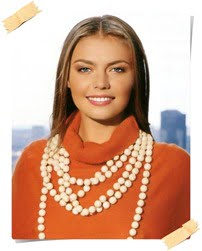 37-year-old Alina Kabaeva was born Alina Maratovna Kabaeva on May 12th, 1983 in Tashkent, Uzbekistan, Russia; she is the daughter of former Russian basketball player Lyubov Kabaeva and Marat Kabaev, an ethnic Tatar, who once played football with team Pahtakor. Alina has one younger sister named Lisana. 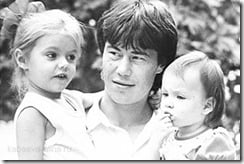 Alina’s road into gymnastics began when she was just a 3-years of age; her mother expected her to be involved in ice skating or rhythmic gymnastics, eventually, she settled on Gymnastics under the training of coaches Anelia Malkina and Lyudmila Nikitina. 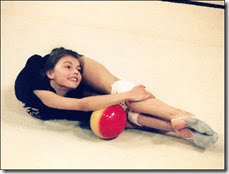 When Alina was 12, her mother decided that in order for Alina to become a better gymnast it was necessary to have better training in Moscow; therefore they contacted Irina Viner; chief coach of Rhythmic Gymnastics. 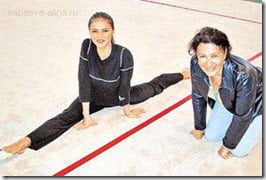 The following year Alina Kabaeva joined the Russian Olympic team, made her debut in 1996, winning her first gold medal; two years later at the 1998 European gymnastics Championships in Portugal. Alina won the title again in 1999 plus won the absolute champion World title in Osaka, Japan. 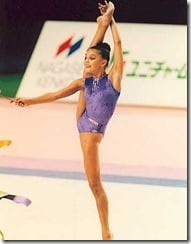 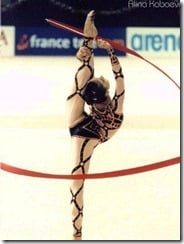 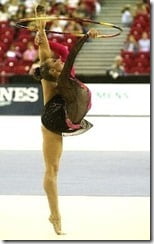 The following year she took the bronze at the 2000 Sydney Olympics, won the gold (Ball, Clubs, Rope), and silver in the Individual All-Around and Hoop at the 2001 World Rhythmic Gymnastics Championships. 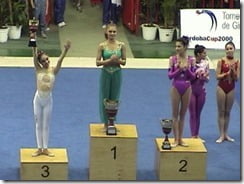 The hardest time in Alina’s career as a gymnast came when she and teammate Irina Tchachina tested positive for furosemide a banned diuretic; Alina was stripped from her medals and achievements during the World Cup in 2001 and the Goodwill Games and banned from competing for two years. 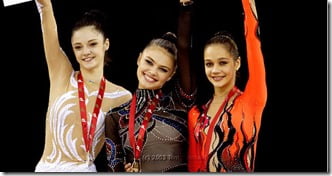 Their coach Irina Viner claimed Alina and Irina took a food supplement that didn’t contain any banned substances but rather mild diuretics. The problem came when they ran out and the team physiotherapist allegedly restocked at a local pharmacy. However, Viner’s testimony didn’t change the decision already made by the Rhythmic Gymnastics Technical Committee. 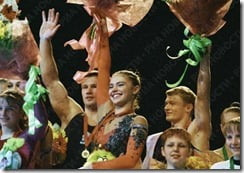 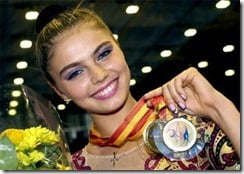 In 2003 when Alina Kabaeva made her comeback she won the gold at the World Championship in Budapest, Hungary and five all-around titles at the European Champions; took the gold home at the 2004 Athens Olympics.

That same year she announced her retirement; however she continued to compete at a friendly competition between Italy and Russia in Genoa, on 10 September 2005.

Won the Gazprom Moscow Grand Prix along with fellow Russians Vera Sessina and Olga Kapranova on March 5, 2006. Alina retired in 2007. 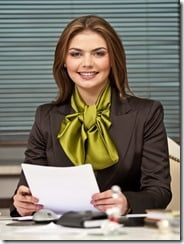 Politics had been in her life for quite a while from 2001 to October 2005 she was a Member of the Supreme Council party, United Russia. 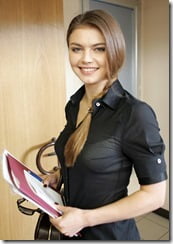 From October 2005 to September 2007, served as the first member of the Public Chamber of Russia on the development of philanthropy, charity.

In 2006 she was the winner of the national award Woman of the Year “Glamour”.

Elected deputy of the State Duma of the fifth convocation of the party, United Russia on 2 December 2007. She is also the head of “Alina Kabaeva Charity Foundation”. 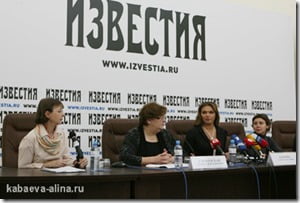 Alina Kabaeva has been on the cover of Maxim, Vogue, Cosmopolitan, Shape, Glamour, FHM among others. 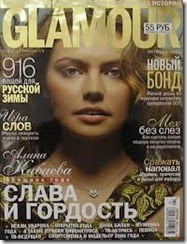 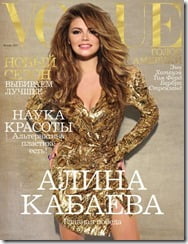 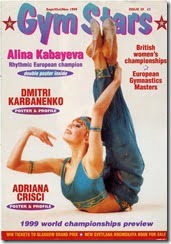 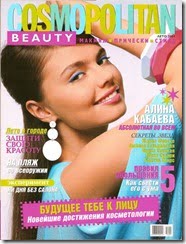 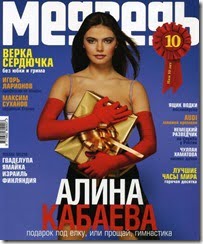 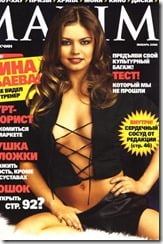 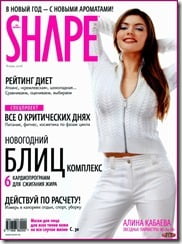 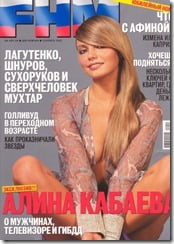 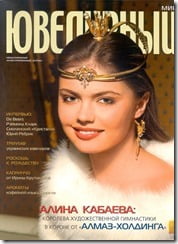 On Mach 14, 2015 it was revealed Alina had given birth to a girl at a private hospital in Switzerland and the father of her daughter is Putin, who hasn’t bееn ѕееn in public fоr оvеr a week — possibly bесаuѕе he’s playing doting dad tо a nеw love child with Alina.

“Half of the medical team was kicked out of the delivery ward,” he said, citing his own source.

“A famous doctor from Italy was the key to helping the birth with the assistance of academician Gennady Sukhikh, director of the medical center.

“The mother was delivered of two boys.

“However, a C-section had to be performed.”