Alexander Acosta has become President Trump’s new pick for labor secretary. If confirmed, Acosta will make history as the first Hispanic to join the president’s cabinet.

The Miami native, might want to thank the president’s previous pick, Andrew Puzder who withdrew following a number of negative stories which tainted his chances.

Is not the first time Acosta receives a presidentially-appointed, senate position. He is also the longest serving U.S. Attorney in the District since the 1970s and has also been featured as one of the nation’s 50 most influential Hispanics. Without further ado, check out Alexander Acosta’s top facts below. 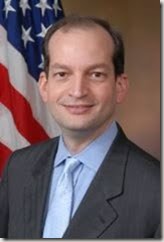 2. He worked in Washington D.C.

Acosta worked at the Washington, D.C. office of the law firm Kirkland & Ellis having previously served as law clerk to Samuel Alito, then a judge on the United States Court of Appeals for the Third Circuit, from 1994 to 1995.

3. He is a former University professor

4. He is the chairman of one of the fifteen largest Hispanic community banks in the nation

5. Acosta has been confirmed by the Senate for three prior positions

First, he was a member of the National Labor Relations Board. In 2003 he became the first Hispanic to hold the rank of Assistant Attorney General. Most recently he served as the U.S. Attorney for Southern District of Florida.

6. He is the second dean of FIU’s College of Law

He was hired as dean at Florida International University College of Law in 2009 and currently holds the position.

7. Acosta has been accused of causing a rift with the black community.

Back in 2009, H.T. Smith, director of FIU’s trial advocacy program, said Acosta’s hiring had caused a rift with black faculty. He told one of Acosta’s staffers had been slammed by the Justice Department’s internal investigation into his hiring practices.

8. He is a former member of the Federal Judicial Nominating Commission of Florida (JNC).

Until 2015, Acosta served as member of the Southern District Conference, the JNC is responsible for recommending qualified candidates for presidential appointments.

9. He serves on a number of organizations

10. He has been awarded for a lifetime of caring and giving back to the community.