Tara’s husband is notorious for being a former Navy SEAL. The Texas native served in Afghanistan –where he lost an eye from an IED blast, it was his third deployment back in 2012.

Dan originally grew up in Houston but due his father’s career in the Texas oil and gas industry moved his family all over the world, including Ecuador and Colombia. As a result, Dan is fluent in Spanish. He holds a Master in Public Administration at the Harvard Kennedy School of Government.

He graduated from Tufts University in 2006, where he earned his Naval officer commission through Navy ROTC. He immediately reported to SEAL training in Coronado, CA. After graduating SEAL training, Dan deployed to Fallujah, Iraq to join SEAL Team Three, his first of five deployments overseas.

According to his website, he retired in 2016 –after ten years in the SEAL Teams. He left service with two Bronze Stars (one with Valor), the Purple Heart, and the Navy Commendation Medal with Valor, just to name a few. 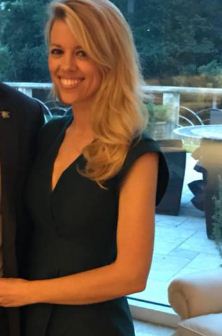 The Republican congressional candidate is happily married to wife, Tara Crenshaw. The couple met in California while he reported to SEAL training. The two were introduced by a mutual friend and Tara’s family happened to be stationed in California at the time. The two have known each other for over a decade, were friends for a longtime and became husband and wife on August 24, 2013.

Tara is also supportive of her husband’s career, the blonde has appeared on videos speaking about her first date with Dan, the life-changing challenge they encountered and the many traits he possesses, making him more than qualified to serve in Congress. She said being on the campaign has been an incredible experience because he gets to be with her husband all the time.