Kristen has enjoyed major success in recent years. The beauty guru and social media star, who is also a keen singer and actress, has become extremely popular across several social media platforms and has since amassed millions of followers and millions to her bank account.

She later joined musical.ly. and went on to gain over 20 million fans.

She posted a lip sync of “Regret in Your Tears” alongside Nicki Minaj to the platform in May of 2017.

She consequently became extremely popular on TikTok, where her creative lip-sync and dance videos earned her over 24 million fans.

She also earned a major following on Instagram through her posts about fashion and modeling. 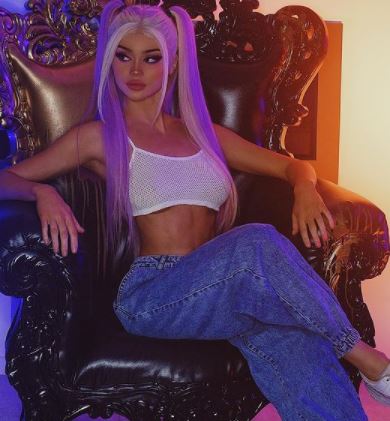 According to online sources, Kristen Hancher net worth in 2021 is estimated at approximately $800K.
Most of her revenue comes from her influencer activities and the few brands she advertises for. She earns about $10,000 for her posts on Instagram.

Kristen Hancher’s career grew rapidly because of the sponsorship deals she’s made with brands.

She has had endorsed a number of brands and products. Her impressive resume consists of multiple partnerships and a slew of highly-viewed YouTube videos. She became popular on Instagram by posting fitness, hair, and makeup videos.
Hancher has partnered with brands such as Bang Energy, Fashion Nova, Lounge Underwear, SHEIN, and SICKO CARTEL. 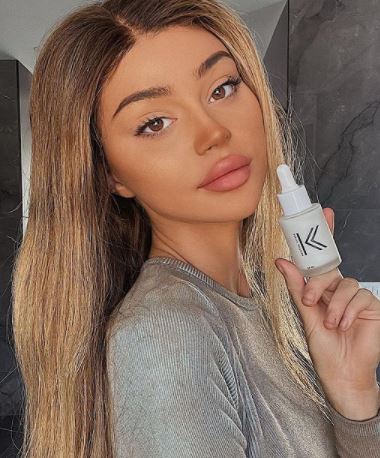 In 2017 Hancher signed a deal to appear on the sitcom, Misshaps, -which was described as a ‘modern-day I Love Lucy.’ The show was produced by the Brat Network.

Other series to her name include Mani, and The Pain of Painting.

In 2017, the entertainer and media content creator signed with Paradigm Talent Agency for representation.

Kristen Hancher was born in Ontario, Canada, on the 17th of May 1999, in a Macedonian descent family.
Hancher grew up with her younger brother, Derek, who is also an Instagram sensation.
She was raised there and attended an Art school, where she graduated in drama.

She made the move to Los Angeles in order to pursue a career in entertainment.

Her father opened up on his Instagram about her requiring surgery when she was younger.

“Lots of people have asked what’s scoliosis, well its when your spine is curved, it can leave you crippled for life. When they operate they open your back and screw steel rods to your spine. This is a picture of Kristen’s back after the operation. They also had to deflate her lung to get access to her backbone because it was so bent. We’re all so happy that things went well and the doctors are so skilled today.”

Kristen started her career when she joined the YouNow network. After a while, she registered on the Musical.ly social media, where people are known to lip-sync on famous songs. In 2017, when she posted her version of the lip-synced song Regret In Your Tears, in which Nicki Minaj briefly appeared, she gained recognition and over 20 million fans.

This fame allowed her to manage successful social media accounts on Tik Tok, with over 21 million fans, and Instagram with more than 5 million fans. Above the fact that she is known for her lip-sync videos, she gained popularity with her fashion and make up posts.
In 2017, Hancher appeared in a few episodes of web series entitled Mishaps and Too Cool For School available on the Brat YouTube channel. 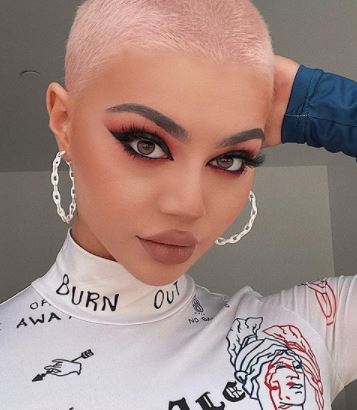 Kristen who is known for being a Kylie Jenner doppelgänger, revealed in in 2017, she has never gotten plastic surgery and that makeup has helped her look a little different.

“I didn’t get plastic surgery. The power of makeup people, take it or leave it. I wish I could post stuff like this without hate,” she wrote in an Instagram comment, according to Superfame. “Embrace yourself, love others, and do what you want.”

While she might known for her Instagram and musica.ly accounts, Kristen first got started on YouNow. She later left the service when she saw that she was a lot more successful on other platforms.

She is currently the 11th most followed person on the service, according to TikTokTip. She has 23.5 million followers. Often referred to as a Kylie Jenner doppelganger, she has become one of the biggest beauty and dance stars of her generation.
She has been nominated twice for the Teen Choice Award and also picked up a nom for Breakout Creator at the 2017 Streamy Awards.

The fashion and beauty influencer on Instagram, shows her more creative side by producing videos in which she sings and dances. In order to create most of her videos it is necessary a Smartphone Tripod and a Ring Light with smartphone holder.

In addition to her fame as a social media influencer, Kristen’s other ventures include acting, singing, dancing and all things beauty.

She has a self-titled YouTube channel where she has posted a range of videos such as makeup tutorials, dare videos and comedy sketches.
She shares cosmetic tips, lifestyle, music and fashion advice. She also posts comedy videos or games involving her friends or family, with baffling titles such as “I GOT LAID!”. 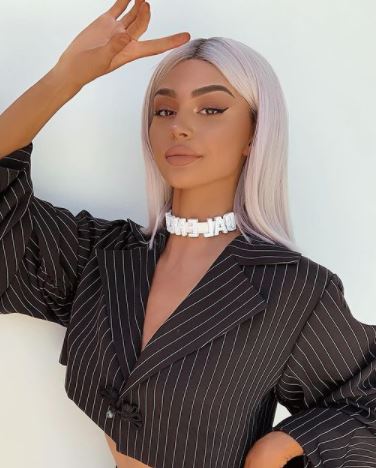 As an actress, she has appeared on multiple Brat web series including Misshaps and Too Cool for School. Mishaps is a comedy composed of short episodes following teenagers in their everyday life and struggles. Kristen Hancher is known for appearing in episodes such as The Cheat, where she invents a cheating ring allowing her to pass an exam, she previously failed.

In Too Cool For School, which is composed of a few episodes that follow teenagers in their high-school everyday life, Hancher is also cast as a main role.

In 2020, Hancher is famous for her jaw-dropping style, partnered with Bellami to launch bold, colorful wigs. The Instagram star’s collection with Bellami offers products that are medium to full density to mimic natural hair and are crafted with clips and an adjustable, removable band.

In addition, the wigs have a transparent lace front cap construction and are pre-plucked with a hand-knotted hairline that has bleached knots. The synthetic wigs are $69 and the human hair wigs are $899.

But if you are looking how to lighten hair without bleach eurohairfashion.com has some great tutorials on how to do it naturally with ingredients found on your pantry, literally.

Among Kristen Hancher boyfriends we find a few names. She dated Andrew Gregory from 2016 until late 2018.
Their relationship is significant since it was the longest relationship she has been in and also because the ex’s made headlines after they accidentally live-streamed their intimacy in 2017.

Following her break-up from Gregory, she moved on to fellow influencer, Austin Hare. The two dated for a while in 2019.
She was previously a part of the team when she dated photographer and influencer Austin Hare. However, when they split up, she ended up leaving the group. 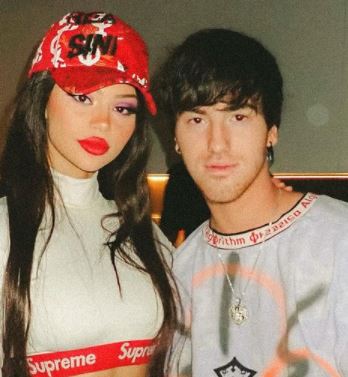 Notable lessons we can learn from Kristen Hancher include, is better to stay away from controversy and she defitniely knows a thing or two about that. 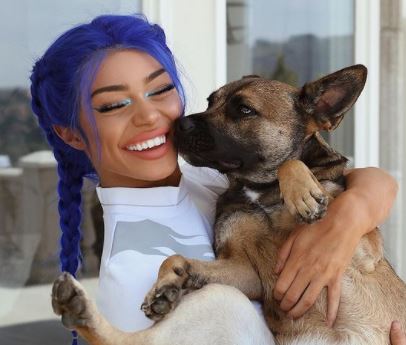 Kristen found herself in some hot water when she posted a photo on her Instagram. The pic, which featured her riding a horse, had many fans accusing her of animal cruelty because of how high the water is.

Through a rep, Kristen set the record straight saying she is an animal lover and that “The horse was safe at all times. There were no waves and nothing that could have endangered the horse.”

She was also in some trouble over her visa expiring. Back in March 2020, she ended up getting stuck in her home country after her visa expired. While the application process took a lot longer than she expected, she went on Instagram Live and revealed that she hated it in Canada.

What does Kristen Hancher do now?

Kristen Hancher is continuously working on new and innovative content and posting throughout her different media channels.

Where can I find Kristen Hancher on social media?

Kristen Hancher is active on most social media platforms including

Kristen Hancher is active on Instagram where she has over five million followers. 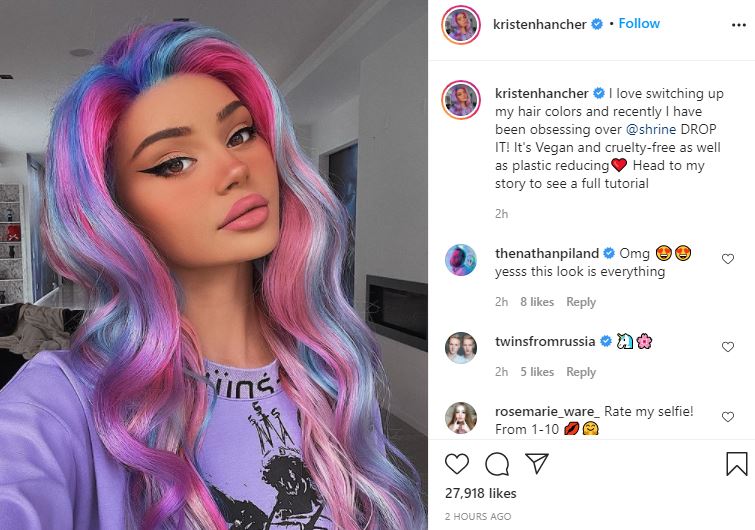 Kristen Hancher is active on Twitter where she has over 50k followers.

Kristen Hancher can also be found on Facebook with over 100k followers.

Kristen Hancher has her own YouTube channel which she began in 2016 . She currently has 1.06M subscribers.

Kristen Hancher is one of the most followed TikTok creators.