House music producer Josh Walden died in Ibiza on Monday, December 28th. According to reports, his body was found in an apartment he shared with his manager.

Josh Walden who is best known for his artistic name, Guru Josh, came to prominence in the rave world with the 1989 song “Infinity.”

Unconfirmed reports say, Guru Josh who was 51, could’ve committed suicide. Though his death was confirmed to the Guardian by his agent, no cause of his descent has been officially released.

Guru Josh, was born in the Channel Islands and moved to London before striking it big. The son of a dentist, Guru Josh, first tried to follow into his father’s footsteps, training to be a dentist when he began DJing. He had been playing in rock group Jesus Cries Wolf. After 2 years playing the club circuit on the back of his success with ‘Infinity’ he started producing fractal videos with great success. He also made video graphics for MTV.
He established himself in Ibiza where he had set up a digital graphics business and a rave promotions company.

The theory about a possible suicide could be based on sources who’ve said Guru Josh’s girlfriend dumped him during the Holydays.

Sources told the Sun, ‘He had troubles with his girlfriend, who walked out on him over Christmas.

His agent said about him: “Guru Josh was without a doubt one of the biggest characters in the business and an immensely talented and creative person.” 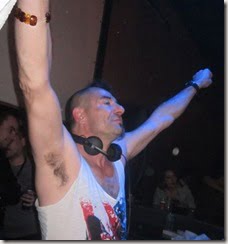 Following the success of Infinity, he then released several other singles including: ‘Freaky Dreamer’, ‘Holographic Dreams’ and ‘Whose Law (Is it anyway?)’.

He also took advantage when in 2008 Infinity was remixed and re-released and reached number 3 on the UK singles chart. He broke back on the dance music scene with the 2008 release as part of the Guru Josh Project,

When it comes to his personal life, the iconic DJ is said to have struggled with addictions to cocaine and alcohol.

According to his website bio, in addition to the Guru Josh Gigs, he involved himself in a number of business projects including an Arial company, creating water fountains with glass tiles and he was also a restaurant owner. He pretty much did it all.

We send our condolences to Guru Josh’s family, friend and fans. RIP.