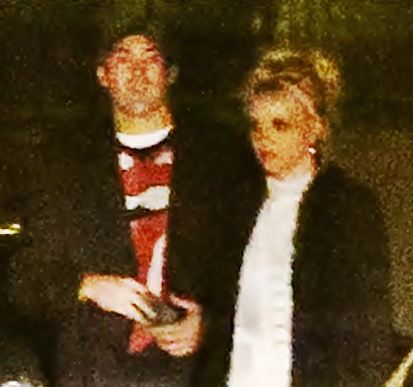 Britney Spears had a date on Valentine’s Day last week with this “anonymous” boyfriend and since then everyone’s been trying to figure out who he is. As far as we know his name is David or Britney’s BF? He’s 27 from Atlanta. They were introduced through common friends.

According to a source:

(David) works for a law firm — he’s not a lawyer — does “field research” … kind of a jack-of-all-trades. He’s definitely not a wealthy guy.

He pretty much investigates people and takes their pictures….

Let’s hope that this time she doesn’t fail again….So long for the days when this pop princess dated the it boy, Justin Timberlake. After that, her love life fell from a pitfall. Her scandals and children neglect didn’t help her score a good guy. It seems only simple guys, and when I mean simple, is simple minded too…approach her. Does she ever sit down and think a minute about her career and children and the harm that this may be causing them?

But let’s stop harassing poor Britney, we all know she couldn’t have a normal adolescence, and all her life was controlled by her manager. If our lives would be in the public eye as hers, we have lots of stories that we wouldn’t want anyone to know…times when we have blacked out, one night stands..The list may continue but this poor princess has to suffer the constant persecution of paparazzi and she must be fed of that!

Let’s hope all the best for her for this time, we don’t give high hoped to this David guy…He is not in the business and his job is not the best one, or liked by anybody but jealous spouses looking for proofs of an infidelity…If he is the man she needs, then what can we say but Go for it Britney! But who knows, life is full of surprises and it might be that this time the princess found her charming prince 😉