Taylor Borland is the pretty wife of The Voice’s champ, Craig Wayne Boyd! That’s right, the couple got hitched last month and didn’t tell anybody!

Taylor’s hubby became The Voice winner back in 2014. We all remember how the hunky country crooner was crowned winner of The Voice in December, 2104, and his single My Baby’s Got A Smile On Her Face later debuted at No. 1 on the Billboard Hot Country Songs charts.

That was the same year the season 7 champ met his now wife, in fact, the couple met at a holiday party, the day after taking home the prize at the finale of the NBC reality show.

Taken back by her beauty, Boy revealed to People ‘it was love at first sigh” and they quickly began dating. The “I’m Still Here” singer popped the questions on June 2015, while riding on his tour bus after a performance at the Oak Ridge Boys Theater in Branson, Missouri. 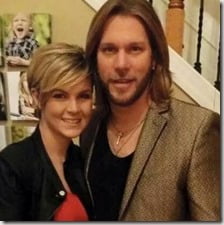 According to TMZ, the country star got and his Wilhelmina model agent, said “I Do” on April 28, but there was no big fancy ceremony. Instead, they did the deed at the Franklin, TN courthouse. Craig’s assistant and 2 of Taylor’s family members were there too.

Sources close to the couple say they will have a big fancy party later this year for family and friends. These two are the definition of spontaneity!

Taylor Borland now Taylor Boyd, hails from California. Accoridng to her LinkedIn, she has been an Agent at Wilhelmina modeling agency since 2013. The blonde studied music business at Berkley College of Music. 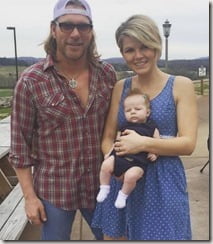 Prior to her current gig, she worked as a production coordinator at Peak Models and Talent, where she was also a Senior Booker.

Her man is also father to three-year-old son Jaxon, from his previous relationship with Natalie Hoover. That, would make Taylor Borland, Jaxon’s stepmom.