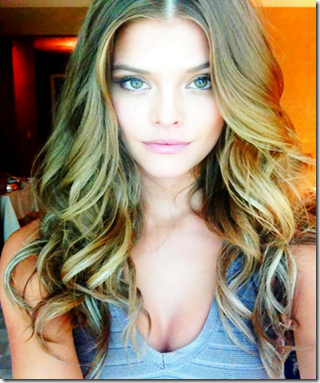 Traffic stopper Nina Agdal yawl! It should be a crime to be this good looking! I mean, she could give a heart attack to your grandpa!  Luckily she is apparently left the single life to hang out closely to Maroon Five’s front man Adam Levine! Adam, 33 and Nina, 21, have reportedly been dating since early spring. Nina has been roaming around on the set of “The Voice,” where, we all know Adam is a judge.

I guess bad boy Levine shows a preference for the models; he is yet to comment on his split from Victoria’s Secret angel, Behati Prinsloo; who he first started dating in May 2012 – but appears to have moved on to a new supermodel girlfriend; and an equal addition we must say! Agdal has nothing to envy Prinsloo!

21 year old has made headlines earlier in the year when she celebrated her birthday at renowned Vegas club Marquee and also when she was sweet enough to make one teenager very happy. Nina accompanied high school student Jake Davidson to his prom after the witty boy made a video plead and posted on YouTube! He originally invited Kate Upton but Nina came instead! She also appeared in a Super Bowl television commercial for Carl’s Jr. Maybe that’s where Levine Spotted her?? Who would have thought Nina likes her man a little seasoned; the girl used to flirt with the Biebs:

“Whenever I’m in a stressed situation, I put on my yellow raincoat [Justin] and immediately the world looks so much brighter. Thank you Biebs. 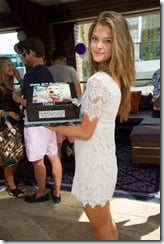 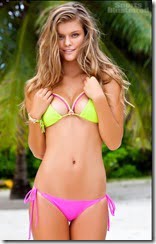 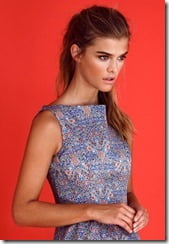 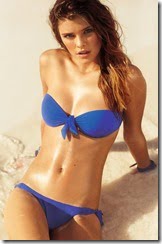 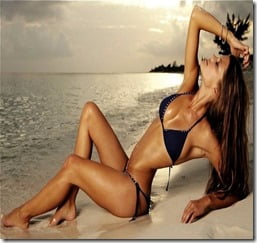 Nina was born March 26, 1992 in Hillerød, Denmark. The Danish fashion model who has modeled for Billabong, Macy’s, Frederick’s of Hollywood, and Victoria’s Secret made her first appearance in the Sports Illustrated Swimsuit Issue last year.

“When I’m not working I try to go natural and not wear a lot of makeup. I think your skin needs to breathe.”

Nina has covered the Denmark “Femina” and “Bazar” magazines; in Mexico she appeared in “Esquire” and we see her in “Bazar” magazine in Germany. Her mother agency is Elite Model Management-Copenhagen but has been all over working in New York, Hamburg, Amsterdam, Barcelona, Los Angeles, Miami, Stockholm.

So we like this hot couple or what??? The romance is still new but she says

”Nina is happy she can be open and not hide anymore.”

After all the start of every relationship is always the most fun!