Soko is the new musician girlfriend of actress, Kristen Stewart. The couple has been making headlines after they were spotted locking lips in Paris.

The two had been seen in a number of outings and though neither of them have confirmed or denied a romance, the recent snaps confirm, certainly something is cooking between the two ladies.

Soko and Kristen were caught kissing after they were taking a walk while in Paris. The pair walked hand in hand and shared a kiss while looking very natural.

Kristen who arrived to Paris on Sunday, was welcomed by Soko with  flowers. Earlier this month, SoKo was in L.A. and was seen with her arm around 25-year-old Kristen, as they left a vegan restaurant.

Soko is actually a 30-year-old singer, her real name is Stephanie Sokolinski and was born in Bordeaux, France in 1986. She has Russian-Polish roots on her father’s side and French-Italian on her mother’s.

Soko has proven to be a wild gal, she dropped out of school and left home at age 16, to pursue a career in the entrainment business.

By 17, she was living in Paris and went on to appear in several French films, most famously, Xavier Giannoli’s A l’Origine. In 2007, she scored a hit across Europe with “I’ll Kill He.” 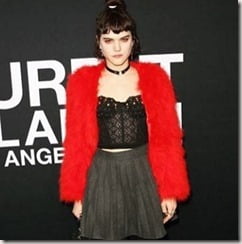 Soko founded her own label, Babycat Records, following a support slot on M.I.A.’s Kala tour and collaborations with the Go! Team and Cornershop. She released her debut EP, Not Sokute.

In 2009 she announced thoughr social media she was leaving the music scene, however she claimed she had been “reborn” only six months later.

In early 2012 she released her album, I Thought I Was an Alien –for which she toured through Europe and also played shows in the U.S.

According to her iTunes profile, she kept actively touring in 2014 and last year, she released her most recent work titled “My Dreams Dictate MY Reality.”

Is clear, though Soko might not be a big name in the U.S. just yet, her career as an actress and singer for over a decade make her quite famous in Paris. Soko is also a big fan of fashion, she sat front row at the Chanel Paris fashion Week show last week, the Daily Mail reports.
Soko has been open about her sexuality while Kristen has said in the past, she will not put a term to define hers. It is not the first time Kristen has been linked to a lady. Last year she and assistant Alicia Cargile were reportedly dating but it was never confirmed.

Soko has been very vocal about missing a woman on social media. Though she has been careful not to mention any names, she makes a reference to a long-distance- relationship in a post, saying:

“loving her from afar”