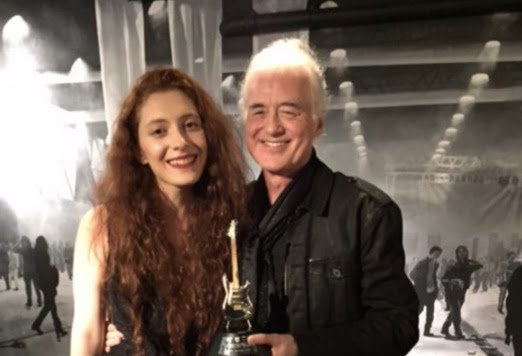 Scarlett Sabet is the young actress and the current girlfriend of Led Zeppelin’s founder and guitarist Jimmy Page. Twice divorced and father of five children including photographer Scarlet Page.

Scarlett Sabet’s famous boyfriend Jimmy Page was born January 9, 1944 in Heston, England. He was a band member of The Yardbird when along Robert Plant then the singer for the Band of Joy and Hobbstweedle, guitarist Jeff Beck, bassist John Paul Jones and drummer John Bonham first under the name the New Yardbirds and Led Zeppelin for their first UK tour in October, 1968. Together they recorded their first album Led Zeppelin in 1969, followed by Led Zeppelin II, III, and IV in 1969, 1970 and 1970.

Houses of the Holy their fifth album was released in 1973 followed by Physical Graffiti in 1975, Presence a year later and in Through the Out Door in 1979, this would be the last album drummer John Bonham played at, he died on September 25, 1980 from was asphyxiation from vomit. After his death, the band split up, however by 1982 their album of used tracks named Coda was released. Led Zeppelin reunited in 1985 for a series of concerts in the US featuring Phil Collins and Tony Thompson on drums. In 1988, Led Zeppelin invited John Bonham’s son Jason also a drummer to play with them in 1988, 1995 and again in 2007.

Jimmy Page’s personal life, womanly speaking I mean started when in the 60’s when he started dating US recording artist Jackie DeShannon, she was credited as the inspiration behind Led Zeppelin’s Tangerine. After their split Jimmy dated Charlotte Martin the french model he started dating in 1970, a year later she gave birth to their daughter Scarlet Page who is today a renown photographer. Page and Martin split up in 1983. Three years later Jimmy Page and actress Patricia Ecker got married, their son James Patrick Page was born in April, 1988. Patricia and Jimmy got divorced in 1995. That same year he tied the knot with Brazilian Jimena Gómez-Paratcha after meeting her on the No Quarter Tour, together they adopted their daughter Jana who was born in 1994, Patricia gave birth to their first daughter together Zofia Jade in 1997 and to Ashen Josan in 1999. Their marriage came to an end in 2008. But Jimmy page didn’t stay single for long. In January, 2015 Page, 71, was seen in the company of his new and young girlfriend Scarlett Sabet, 25. Scarlett Sabet an actress is the daughter of French mother Marie-Claire and Iranian father Masoud Sabet. Scarlett attended private school Hurtwood House in Dorking and became known for her role as Nadine alongside Billy Zane in the 2008 film A Perfect Hideout, in 2009 she starred as Hera in the t.v series Myths and played Anna in the t.v movie The Village in 2010. Scarlett starred as the Angel of Death in the series Skins and Jill in Life’s Too Short in 201; last year, Sabet appeared in the t.v movie Ladders as Arrabela and played Zara in the short film Burning.

Scarlett Sabet is not the first young woman, Page has dated, back in 1972 he dated Lori Maddox a L.A based groupie, then 14, who claimed Richard Cole kidnapped her on Jimmy’s orders, even though she said she fell for Page, she was kept locked up so no one would know about their illegal relationship, he dumped her in 1974 when he hooked up with Bebe Buell, the mother of actress Liv Tyler.