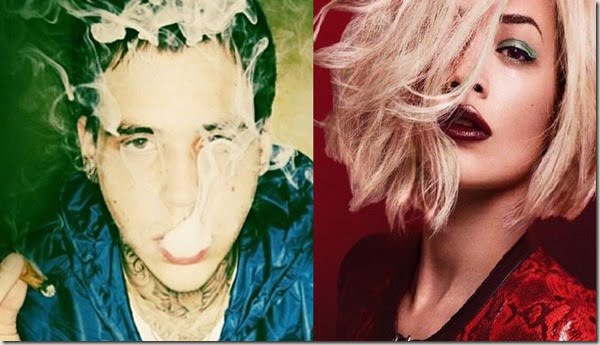 Pin 23-year-old Britt singer Rita Ora –who has enjoyed of great success since her debut studio album came out –is allegedly dating Warner Bros. rapper “Ricky Hil” who is the son of fashion legend Tommy Hilfiger.

Originally born Richard Hilfiger, is the second of four children of his father’s first marriage to ex-wife, Susie. He has three sister, Alexandria, Elizabeth and Kathleen. He also has a brother -Sebastian Thomas –from his father’s second marriage to Dee Ocleppo.

Ricky born in Connecticut, is not only a rapper but also a singer/songwriter, Ricky has released over 18 mixtapes, the most succesful being SYLDD (Support Your Local Drug Dealer) with features from The Weeknd, Fat Trel, Leona Lewisand others.

The young, tatted, white guy has had a rebellious lifestyle, he went from being the chubby son of Tommy to a bad boy who openly boasts about smoking weed all the time on Twitter and has released mixtapes called Support Your Local Drug Dealer. In 2010 he was arrested for selling drugs and was forced to attend rehab by the court.

The following year he struck some luck after signing a record deal with Warner Brothers Records. Hil claims he is

the best rapper that was born in Connecticut, ever,”

Rich has the words “I love you, Dad,” tattooed on his neck and Hil told XXLMag.com,

“[My dad] kinda tells me sometimes like he’s jealous, he’s like ‘Man, if I knew how to make music, I would have made [records] instead of clothes.’ He tells me that all the time, kinda like he lives vicariously me through me, you know?”

According to the Mirror.co.uk, the pair went public for the first time this weekend as they were spotted holding hands after a date on Saturday at Nobu. The couple hasn’t been dating for long so they are on that sweet, holding hands, kissing, PDA period.

They have been rumored to have been an item since last month , when we first began seeing pictures posted of them together. They met randomly at a Hollywood party and they have been having lots of fun according to media reports, they clearly hit it off and things are on track as Rita invited Ricky to temporarily accompany her on her travels.

Ricky has already written a song for her and is surely hoping it will have the same effect she and Calvin had when they collaborated together.

Do you think this could be the beginning of a long romance between the two of them or just Ricky’s opportunity to break in U.K’s music scene? You can read more about him this extensive New York Observer profile. You can find Ricky on Twitter here.