Georgina Marquez is the proud mother of singer and social media star, Rebecca Black -best known for her 2011 single, Friday.

Georgina’s pop star daughter gained major exposure for the viral hit “Friday.” She released additional singles “Sing It” and “In Your Words” in 2012. Her YouTube channel, where she uploaded “Friday,” has more than 1.4 million subscribers.
Born June 21, 1997; the California native began singing and dancing at a young age and was encouraged by her mother to pursue a career in singing.
Her parents Georgina Marquez and John Jeffery Black are also the proud parents to Rebecca’s younger brother, Chase Black. Her parents seem to be currently divorced. Georgina seems to be currently in a relationship with a guy named, Sean. 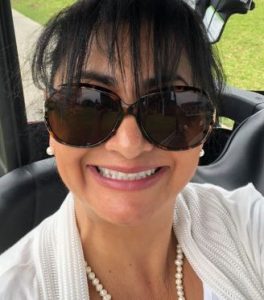 Georgina Marquez Kelly is her daughter’s biggest example of pursuing one’s dreams. In a social media post where Rebecca pays tribute to her Marquez on mother’s day she also shares that Georgina immigrated from Mexico on her own while in her 20’s.
Georgina Marquez made the huge decision to leave her home country in order to pursue her dream career in veterinary medicine.

According to her LinkedIn, Georgina Marquez is an Expert Witness in Veterinary Internal Medicine at ForensisGroup Expert Witness Services.
She attended Universidad Nacional Autonoma de Mexico, where she graduated in 1986 as a Doctor in Veterinary Medicine. She also did a Small Animal Internship at the University of Minnesota. From 1992 until 1994, Georgina did her Residency in Small Animal Internal Medicine at the University of California. In 2016 she received a Certification in Hemodyalisis and Extracorporeal Therapies also from UC Davis.