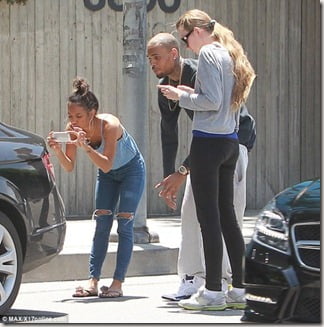 Olga Gure-Kovalenko is the woman whose Mercedes was rear-ended last month by Chris Brown. Immediately after the incident, they both pulled to the side of the road, got out and took pictures of their vehicles.

Olga asked for Chris’ driver’s license, registration and insurance info but instead, his girlfriend Karrueche, who was a passenger in the car at the time of the accident, handed over her own DL. Olga said she needed to see Chris Brown’s DL and Karrueche insisted that she was the owner of the vehicle so Chris didn’t need to give any info.

When Olga insisted, and Chris and Karrueche refused to cooperate, she felt the need to take a picture of them both, fearing that they would flee the scene, and things got crazy from this point on.

“The guy [Chris] tried to grab camera or me.  I jumped back, the girl [Karrueche] screamed, ‘Don’t touch her, don’t touch her!’”, Olga says.

According to Olga’s statement, Chris continued screaming and then “slammed a door and drove away fast and noisy.” She also said he “bragged about how much money he has and offered up false registration.”

Olga’s lawyer is Freddy Sayegh, he says his client didn’t know the driver was Chris Brown at the time of the accident.

Chris Brown was charged with hit-and-run. If found guilty, he could face up to six months in jail for each offense, considering he provided false information. But if it is determined that the incident violates his probation, Chris could be facing four years behind bars!