For years her hubby has been penning hits for some of the biggest and brightest names in Nashville. There’s no doubt he’s a gifted songwriter, but this year things are a little different. The 37-year-old released his very own album.

2015 will sure be a year for the books for the Stapleton’s as his debut album titled “Traveller” won Album of the Year and Stapleton won the 2015 Country Music Association Award for Best Male Vocalist, New Artist of the Year!

No doubt Chris is a consecrated artist. According to Rolling Stone, after scoring 50 album cuts, Stapleton got his first single – and first Number One – with Josh Turner’s “Your Man.” Other chart-topping hits include “Never Wanted Nothing More,” for Kenny Chesney, Darius Rucker’s “Come Back Song,” “Drink a Beer,” by Luke Bryan and Thomas Rhett’s “Crash and Burn.” Tim McGraw, George Strait, Lee Ann Womack and Alan Jackson have also cut his songs.

From 2008 to 2010, Stapleton was the lead singer of the SteelDrivers, a blistering gut-bucket-bluegrass quintet founded by some of Nashville’s most gifted behind-the-scenes players.

If It Hadn’t Been for Love,” which Stapleton wrote for his former band, was also recorded by global superstar Adele for a deluxe edition of her 21 LP. 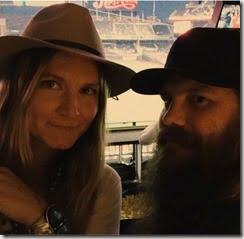 What better match for the musician then another talented soul, Morgane Stapleton. She was born Morgane Hayes and is also a chart-topping singer-songwriter.

Morgane Stapleton and Chris met while at the Sea Gayle office. At the time, Morgane was a fellow singer and top-shelf songwriter who scored a big hit with Carrie Underwood’s “Don’t Forget to Remember Me.”
Morgane Stapleton jokingly revealed during an interview, she would stalk him until one night, Chris asked her if she would write a song with him. How romantic! The couple tied the knot in 2007 and she pretty much became, his wife, harmony partner, onstage foil, touring mate and all-around muse. 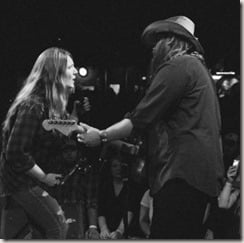 Chirs performed a version of “Traveller,” alongside wife Morgane back in April during an apparition on the The Late Show With David Letterman.
Morgane Stapleton is also the mother of the couples two children, a son and a daughter.

According to the Washington Post, the mom of two was also very involved in putting together “Traveller.” She pretty much picked out the songs from a pile of her hubby’s work.