Mindy Mann was not just the nanny for Gwen Stefani and Gavin Rossdale. She was also the mistress Gavin had a an affair with and the cause of the couple’s breakup and divorce. This is not something new, we heard about Rossdale banging his nanny for years, but still let’s find out who is Mindy Mann the nanny mistress. 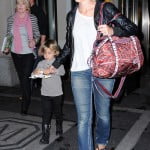 Mindy Mann and Gavin Rossdale had a torrid, steamy affair for three whole years all under Gwen’s nose who only found out about her husband’s infidelities with the help until this February. Ms. Mann who had been taking care of the couples children Kingston, 9, Zuma, 7, and Apollo, 20 months was fired by Gwen after she found explicit text, naked photos of Mann and plans to meet for *** on the family’s iPad that was linked to Gavin’s phone.

Apparently one of the other nannies found out and told Gwen.When she confronted Gavin, he told her nothing happened and the whole issue was simply flirtation, but Gwen didn’t feel for it and push him until he finally admitted of the affair. 27-year-old Mindy Mann was born Melinda Mann in to Philip and Jennifer also parents of Mindy’ sisters, Carly her older sister and younger sister, Nikki. Mann graduated in 2004 from All Saints Anglican School.

Mindy Mann was the nanny Gavin was seen touching her *** while they were hikin with the children back in 2012, some sites said the blonde with Rossdale was not his nanny but his sister Soraya Rossdale, wrong! the blond was his nanny Mindy. When Mindy began working for Gwen she was showered Mindy with gifts, clothes and trips, basically she was treated like the little sister. And it seems that Mindy born and raised in Australia got her job after a friend of Gwen recommended her, Mindy worked for them for seven years and she became obsessed with Gwen she even tried to dress like her, be like her according to sources close to her.

“if Gwen would eat something or do a workout or get a new handbag, Mindy would do the same thing.” More photos of Mandy Mann below and don’t miss her with Gwen and Gavin in Tokyo in the Video after the jump.