Saweetie is the gorgeous and talented girlfriend of musician Quavo -best knonw as a singer, rapper and record producer.

Saweetie’s boyfriend is widely recognized as a member of hip hop music trio Migos.
The rapper real name Quavious Keyate Marshall, joined Kirshnik Ball, AKA Takeoff, and Kiari Cephus, AKA Offset, in 2009, to form Migos. Quavo was named the most influential rapper of early 2014 by Complex Music. Since then, the trio has released a number of hits, incuding their single “Versace.”
He has been dating fellow rapper Saweetie since September 2018.

Saweetie was born Diamonté Harper on July 2, 1993; in Santa Clara. She later relocated to Sacramento. Her stage name comes from a nickname that her grandmother gave her as a child. She has twin sisters named Maya and Milan. Her mother is of Filipino and Chinese descent, and her father is African American. 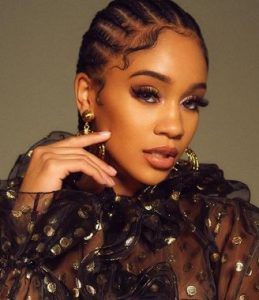 Saweetie who has made a name for herself in the rapping world, transferred from San Diego State to the University of Southern California, where she studied communications with an emphasis in business.
An interest in poetry led her to perform at open mic’s which in turn helped her discover her passion or music. Her influences include Lil’ Kim, Foxy Brown, Nicki Minaj and Trina.

Saweetie gained notoriety on social media after she began selling a line of hats from a collection called The Money Club. This soon fell to the sidelines when she became a well-known name on the rap circuit.
Saweetie became well known online by posting videos of herself freestyling over old-school rap beats in her car. After her freestyle over Khia’s 2002 hit “My Neck, My Back (Lick It)” went viral, ‘ICY GRL’ was born. She released a studio version with an official music video in October 2017 which has since amassed over 20 million views. She released her debut EP ‘High Maintenance’ in March 2018 and is currently signed to Warner Bros Records.

Saweetie is also the cousin of record producer Zaytoven, who has worked with the likes of Migos, Future, Gucci Mane, and Usher. They worked together producing a number of tracks for her debut EP ‘High Maintenance’.
Prior to Quavo, she was romantically linked to Justin, Diddy’s eldest child.