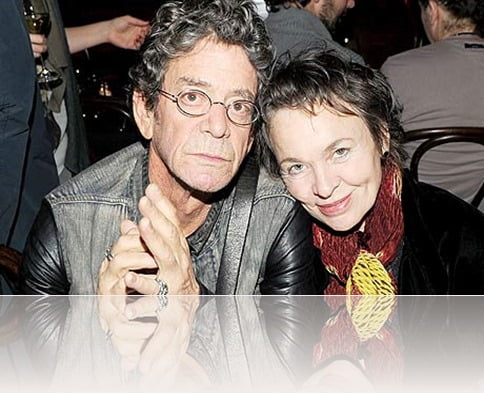 We are sadden to hear about the sudden death of Lou Reed the amazing singer and songwriter of the Velvet Underground, Lou Reed is survived by his beloved wife Laurie Anderson Reed.

71-year-old Lou Reed was married three times, Betty Reed his first wife with whom he got married on January 9th, 1973, we did not find the divorce date, but  by February 14, 1980 he got married to Sylvia Morales a British designer and the inspiration behind Reed’s hits “Think It Over” and “Heavenly Arms”. Sylvia and Lou divorced in 1990. Reed also dated a woman named Shelby Albin. A couple of years later Reed met Laurie Anderson with whom he began performing live and collaborating, for example he contributed with the vocals and guitar in Laurie’s 1994 song Bright Red/Tightrop and she contributed with vocals in his 1996 hit Set The Twilight Reeling and with the viola in his song Ecstasy in 2000.

Laurie and Lou became the golden couple of the decade and live together for years, nobody expected them to get married but on April 12, 2008 in Boulder, Colorado 60-year-old Laurie and 66-year-old Lou tied the knot in a private ceremony with just two friends who were also their witnesses.

In June, Laurie told media that Lou was recovering from a liver transplant procedure, previously underwent treatment for hepatitis.