Joseph’s daughter has been extremely successful since releasing her debut album The Fame in 2008. She has since won multiple Grammy Awards and has become known for as a fashion pioneer.
She became the first recording artist in history to have three singles sell over four million copies each online. Her best known songs include “Judas,” “Bad Romance” and Shallow. In 2018, she starred as Ally in the remake of A Star is Born alongside Bradley Cooper.

Joseph Germanotta and longtime wife, Cynthia Germanotta -welcomed their talented daughter on March 28, 1986 in New York; and named her Stefani Joanne Angelina Germanotta. They are also the proud parents of another daughter, Gaga’s sister, Natali.

Joseph has been described as a an internet businessman, and his wife is a former telecommunications assistant who now advocates for mental health. 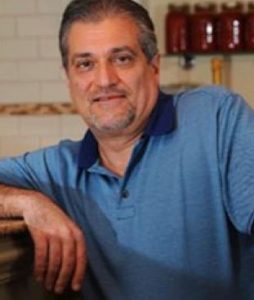 Joe was born August 9, 1957 and is originally from New Jersey and attended Eli Broad College of Business at Michigan State University. He is the president of Guest WiFi, which is one of the world’s largest providers of wifi to hotels and hospitality establishments. For that reason he is ofted named as ‘the godfather of hotel wi-fi.’
In addition, Joseph Germanotta is a restaurateur. The New York native is the owner of Art Bird & Whiskey Bar located at New York City’s Grand Central Terminal.
In recent reports, Germanotta is said to be refusing to cough up $260,000 in rent and fees from his restaurant. The entertainer’s dad has told outlets the homeless population is hurting his business and is aksing to renegotiate his rent or to be release him from his lease. Being the father of Lady Gaga- it shouldnt be that hard to come up with the money, right? -After all his daughter is a winner of Grammy’s, Oscars, and Golden Globes. Besides, is not like he doesnt have the money himself.

However, the issue is kind of a big deal since Joe had to meet with an MTA board and talk about other issues like a rodent problem, poorly maintained restrooms and outdated seating.
But that’s not all for Mr. Germanotta, as he is also employed by his daughter, running House of Gaga Publishing, the company that handles publishing her music.