Kimberly Rousseau is the girlfriend of convicted rapper, Bobby Shmurda. The couple were said to be in a relationship at the time Shmurda was jailed for conspiracy to commit murder.

He is one of two children born to a Trinidad mother and a father of Jamaican descent. He has one older brother.

Bobby caught attention with his track “Hot *****” and signed a deal with Epic Records. He gained national recognition and peaked at number 6 on the US Billboard Hot 100.

Bobby broke into mainstream success following his “Hot *****” video, which was actually a freestyle over Lloyd Banks’ “Jackpot” beat (produced by Jahlil Beats). The video ended up going viral, as well as a dance he did in the visual, coined the Shmoney Dance. The Shmoney Dance soon took over Vine, and celebrities even began taking part in the trend- Beyonce did it live on stage during her “On The Run” tour with Jay Z, while Rihanna was also seen busting the Shmoney Dance. Drake give Shmurda a co-sign when he took to Instagram to doll out a “Hood Grammy” to the NY rapper. Shmurda quickly inked a major label deal with Epic Records.

Bobby began rapping from a young age, he was 10 the first time he started rapping. He didn’t’ make it until 2014, the same year he was charged with conspiracy to commit murder, weapons possession and reckless endangerment. 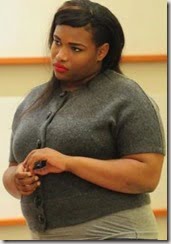 Bobby’s been in jail since December 2014, he is currently serving 7 years for his murder conspiracy conviction.

Police claim they saw him flashing the gun in an apartment and when they went to investigate, he tried to hide it in a couch. He was set free on $10,000 bail. On December 17, 2014, police arrested Pollard and 14 others, including his brother Javese and his fellow GS9 label-mate Rowdy Rebel.

In 2015, Kimberly Rousseau gained some negative attention after it was reported she tried to sneak him a latex balloon wrapped in black electrical tape with a shank inside of it.

The then 18-year-old Kimberly Rousseau was  busted in June 2015 and she pleaded guilty to the charges.

At the time it was reported, the judge was lenient and didn’t send Kimberly to prison because she’s trying to change her life. She was said to be taking classes at Queensborough Community College.

Recent reports say Kimberly’s beau has just been sentenced to 4 years in prison for having a shank.