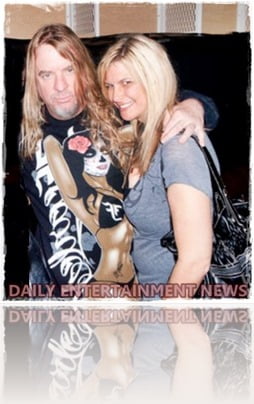 49-year-old Jeff Hanneman one the founders of Slayer who was also their guitarist died today of liver failure at a hospital in Southern California. his beloved wife Kathryn Hanneman, brothers and sister were by his side.

“Slayer is devastated to inform that their bandmate and brother, Jeff Hanneman, passed away at about 11 a.m. this morning near his Southern California home. Hanneman was in an area hospital when he suffered liver failure,” the band said in a statement posted on its website and Facebook page.

Hanneman had recently began to write songs, preparing for Slayer’s new album, a few years ago in 2011 he contracted a flesh eating bacteria known as Necrotizing Fasciitis, result of a spider bite and nearly lost his right arm, during his sickness Exodus guitarist Gary Holt fill in for him, nevertheless Hanneman was ready for Slayer’s tour in 2012, but by  early 2013 it was announced Hanneman was ill again and couldn’t join the band. 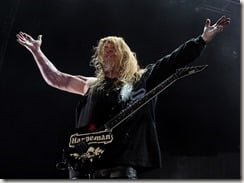 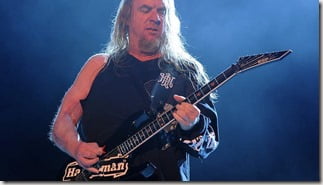 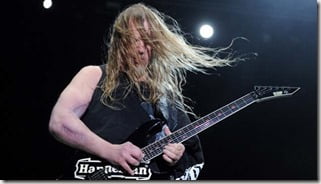 Slayer fans everywhere – it’s time to let you know what is going on with our brother Jeff Hanneman.
As you know, Jeff was bitten by a spider more than a year ago, but what you may not have known was that for a couple of days after he went to the ER, things were touch-and-go. There was talk that he might have to have his arm amputated, and we didn’t know if he was going to pull through at all.

He was in a medically-induced coma for a few days and had several operations to remove the dead and dying tissue from his arm. So, understand, he was in really, really bad shape. It’s been about a year since he got out of the hospital, and since then, he had to learn to walk again, he’s had several painful skin grafts, he’s been in rehab doing exercises to regain the strength in his arm; but best of all, he’s been playing guitar.

Hanneman and his wife of 16 years Kathryn met in the 80’s, they got married in 1997 and never had any children.

This is from an interview Hanneman talked about wife Kathryn staying home..

“you were saying that the wife stays home, and you kind of have the separate worlds there that keep things in balance for you.
HANNEMAN: Yeah, for me it works out perfect because once we tour for months and months and I get sick of these guys, I go home and she’s fresh. Then when I get sick of her I go and hang out with these guys.”

Jeff Hanneman’s loving wife 45 year-old Kathryn Gail Hanneman was born on July 13, 1967, they reside in Hemet, CA. before that they lived in Santa Monica, and Idyllwild, CA.

Our thoughts and prayers go out to her, Jeff siblings, fans, and friend throughout this sad time.