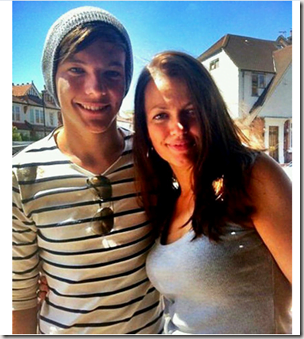 One Direction’s Mum, Johannah, known as Jay –the lovely mother of our hunky actor/singer/entertainer/teen heartthrob/footballer –Louis Tomlinson, became a mother for the sixth and seventh time earlier this week! A spokesman for Tomlinson said: “Daniel and Johanna are pleased to welcome twins – a boy Ernest Rupert Atholl Deakin and a girl Doris Poppet Deakin.

The 40-year-old mom of seven and fiancé 30-year-old Dan Deakin have been engaged since last March. Her partner, Dan proposed while they were in Dublin supporting One Direction on their world tour last year.

According to sources, Louis and his family are ecstatic at the addition to the growing family!

The 22-year-old singer is Jay’s first born but she is also mother to his six younger half-siblings; sisters Lottie, Fizzy, Phoebe, Daisy, and now Doris & Ernest.

The lovely brunette announced back in October via twitter that she would be having her second set of twins!

Jay and her first husband, Troy Austin, split up when Louis was 2 years old. She married her second husband, Mark Tomlinson, not long after her first divorce, and they had four daughters together: Lottie (who is now 14), Felicite (who is 12) and twins Phoebe and Daisy, who are 8. Louis took stepdad Mark Tomlinson’s last name. Jay and Mark Tomlinson got divorced in 2011. 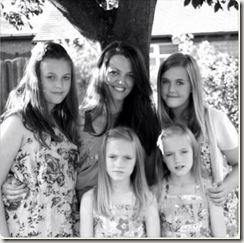 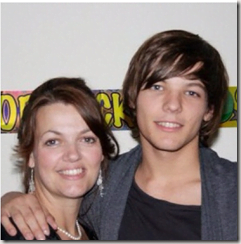 She and her fiancé Dan –a former shop assistant and bank adviser 10-years her junior, have had a lot of negativity towards their relationship. 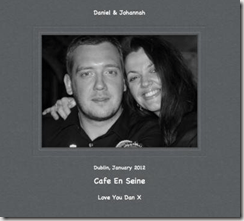 A few months ago it was reported she Dan, were being accused of being shameless lovers because he left his wife for her, shortly after he and his wife experienced the stillborn death of their baby daughter, according to a Daily Mirror article published on Aug. 10, 2013.

But after enjoying the benefits of being part of One Direction’s inner circle, flying around on private jets, the couple and new parents of twins seem to have put all that in the past.

Congrats to Louis who now has a twin baby-siblings!

The 1D mother, was diagnosed with the disease earlier this year and had been hospitalized since May.

Johannah had been known to have a close relationship with Louis –whom she gave birth at age 18. She always said how proud she was of him and spoke to media on how generous he was with her and his younger siblings.

As well as One Direction star Louis, 24, she leaves behind six other children, Lottie, 18, Felicite, 16, twins Daisy and Phoebe, both 12, and twins Ernest and Doris, both aged two, who she gave birth to prematurely in 2014. She was also grandmother to Louis’ ten-month-old son Freddie.

She is also survived by husband, Dan Deakin.

Johannah, a mother of seven, worked as a midwife and a TV assistant during her career. She was known in recent years for her charity work. She worked tirelessly on numerous charity campaigns, creating memories for many individuals and their families.

Her second and last husband, doctor Dan Deakin, released a statement praising the mother of his twins. He said:


Johannah was first and foremost a truly amazing mother to seven children – Louis (24), Lottie (18), Félicité (16), and two sets of twins, Phoebe and Daisy (12) and Ernest and Doris (2) – whose individual talents and success are testament to the principles and beliefs she instilled in them.

‘Incredibly selfless, she would always look to put other people before herself. She desired nothing more than for everyone around her to be happy and loving.

‘It wasn’t uncommon for Johannah to hear through the media of an individual in need of assistance, and she would immediately make it her objective to get that person what they often desperately needed, and rarely without success.