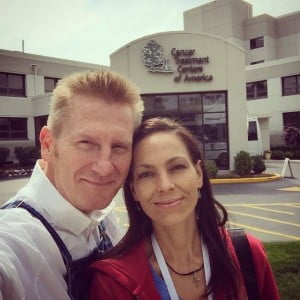 Rory kept his friends and fans updated about his wife, she got to spend one last Christmas, last Valentine’s Day with sushi and having the opportunity to fall asleep with his arms around Joey, but the time to say goodby was coming and they all had the chance for one last kiss.

Joey gathered her family together around her and she said goodbye to each of them… to her mother and father and her three sisters.  There were lots of tears as she explained to each one how much she loved them and that she was going to be going home soon.  That her time here was done and she was going to go to sleep soon.  And then she asked me to bring our baby in.  And so… I set our little Indy on Joey’s lap and we all cried with my wife as she told her how much her mama loved her and, “…you be a big girl for your papa… and that mama will be watching over you”.  And then she pulled Indiana up and she kissed her.

Joey closed her eyes and went into a deep dream, she was still there, but her body giving up quickly, was a sign she wasn’t going to be there much longer.

My wife has been asleep for days now and her body is shutting down quickly.  The hospice nurse came again this morning and said Joey will most-likely only be with us for a few more days… at the most.

A few more days… In the 40 short years that Joey has lived, my bride has accomplished many great things… she’s lived a very full life.  But even more than that, she has loved those around her greatly and been loved greatly in return.  I can honestly say that Joey’s isn’t just a life well-lived, it’s a life well-loved.

God only gives each of us a certain amount of time to be on this earth and every day when we wake up, we get to decide how we are going to spend those precious minutes and hours.  There are no do-overs, no second-chances, no next-time-around’s to get it right.  Joey knew this and she has made each and every day count. One of the last things Joey said before she drifted into the deep sleep she’s been in for a few days now is, “I have no regrets… I can honestly say, that I have done everything I wanted to do and lived the life I always wanted to live”.

I went through some pictures on my computer last night and let them take me back.  Back to when we met… oh, how young and beautiful she looked.  And I let them carry me through the years, to where we are now.   Lying here beside me, she is still so beautiful to me.  We recorded a song a few years ago by Shawn Camp and Dennis Morgan for the same album that we recorded “When I’m Gone” on, but it didn’t make the record.  I think maybe it was on some special bonus version somewhere, but for the most part nobody’s ever heard it.  I came across it the other day and put some of Joey’s photos with it… I could barely listen or watch at first.  But then, as I listened and watched more… I smiled more and I cried less.  It’s called “In The Time That You Gave Me”

On March 4, 2016 at approximately 2:30 p.m Rory, friends and family held hands and prayed around Joey’s bed, she took her last breath on this world while they were praying, a few seconds later Joey Martin Feek took her first breath in the presence of her savior.

My wife’s greatest dream came true today.  She is in Heaven.

The cancer is gone, the pain has ceased and all her tears are dry.  Joey is in the arms of her beloved brother Justin and using her pretty voice to sing for her savior.

At 2:30 this afternoon, as we were gathered around her, holding hands and praying.. my precious bride breathed her last.  And a moment later took her first breath on the other side.

Though this is, and has been, a time of many tears of sorrow, it has also been a time of countless tears of joy.  There have been too many beautiful moments to count or even begin to share in this blog.  But I try.

When a person has been through as much pain and struggle as Joey’s been through, you just want it to be over.  You want them to not have to hurt anymore, more that you want them to stay with you.  And so, it makes the hard job of saying goodbye just a little easier.

After four-and-a-half months in Indiana, we will soon be back home in Tennessee.  Me, and our little one, with our older daughters.  It’s hard for me to imagine being there without Joey, but at the same time… it is where she wants us to be.  It’s where she will be…  She’s gonna be in the mint growing beside our back deck, the sweet-corn frozen in our freezer and a million other places that her hand and heart has touched around our little farmhouse and community.  Joey will still be with us.  Everywhere.

So if it’s okay, I’m gonna close, wipe my tears and pack our bags to hit the road headed south.

She’s already got a head-start on me.