Walk off the Earth member and and multi-instrumentalist, Gianni “Luminati” Nicassio is the boyfriend of rocker singer Sarah Blackwood.

His gal who is the mother of their 23-month-old baby –Giorgio  Michael –and  who is currently 7-months-pregnant is outraged after she and her son were forced to walk off a United Airlines flight all because her son got too fussy!

According to TMZ, Sarah was kicked off a United Airlines flight heading from San Francisco to Vancouver because her toddler wouldn’t stop crying. 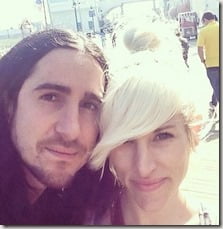 On Twitter Gianni describes himself as “Music Producer/Writer and lover of love.” The couple began working together around 2009 thought they have known each other before.  The Canadian group Walk Off The Earth first came together in 2006. 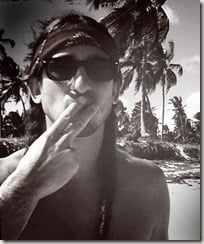 His blonde gal says of the recent episode, she was told by the airline her kid was a safety risk! According to her side of events she was literally escorted out of the plane and was left humiliated. Girogio ended up falling asleep.

Isn’t it natural for babies to cry all the time on airplanes?