As the bassist for the Red Hot Chili Peppers, Frankie Rayder’s husband is one of rock’s most famous performers.

Frankie Rayder hubby was born in Australia in 1962. In high school, Flea turned to punk and rock. He formed the Red Hot Chili Peppers with three friends from high school.

Flea actually began his career as a jazz enthusiast. He was also a talented trumpeter growing up.

The Red Hot Chili Peppers , known for its funk-punk infused sound, has enjoyed great success since the release of their 1991 breakout album BloodSugarSexMagik. A slew of  successes have followed, including 2006’s Stadium Arcadium and 2011’s I’m With You. In 2012, they received special recognition for their contributions when they were inducted into the Rock and Roll Hall of Fame.

Aside of the band, Flea has recorded and performed with other artists, including Mick Jagger, Alanis Morissette, Johnny Cash, Radiohead. The versatile performer has also appeared in a number of acting gigs, among we can mention: the 1983 film Suburbia. He also had recurring small part in Back to the Future Part II (1989) and Back to the Future Part III (1990) with Michael J. Fox. He also lent his voice to several animated projects, including The Wild Thornberrys Movie (2002) and Rugrats Go Wild (2003).

Flea, like many famous musicians, also went trough a dark period, during his hard partying days of drug and alcohol abuse. He credits  his children for keeping him clean. 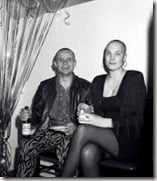 Frankie Rayder is actually his second wife, he was first married to Loesha Zeviar (pictured above) with whom he fathered daughter, Clara Balzary, born in 1988. Ready to know more about gorgeous Frankie Rayder? 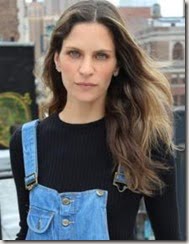 Frankie got her start in modeling after she met photographer Steven Meisel, who books her for a photo session that appears on the cover of Italian Glamour, in the early 90’s.

In 1997 she debuted on the fall Paris runway for designers like Chanel, Christian Lacroix, and Dries Van Noten. She became the face of Givenchy, photographed by Craig McDean. She landed major magazine covers including Vogue, Arena and Harper’s Bazaar. In 2001 she was featured in the Pirelli calendar, that same year she made a cameo for the movie Zoolander.

Before meeting Flea, she was rumored to be engaged to Roman Coppola back in 2002. She was also linked to actor Nicolas Cage. In February of 2005, she and Michael Balzary announced they were getting married.

Frankie Rayder gave birth to the couple’s  only daughter, Sunny Bepop Balzary in 2005. She returned to modeling in 2008 by appearing in the Roberto Cavalli and Stella McCartney fall ad campaigns.