The longtime marriage produced eight children, the two remained together until Rosemary’s death in 2008. The two were married for 60-years.

The eight child of Antoine Caliste Domino and Marie-Donatille Gros, the Louisiana native of French Creole descent –became known by his musical style which led him to sell millions of copies in the mid 50’s. The singer-songwriter and pianist had at least, 35 records in the U.S. Billboard Top 40 and five of his records were certified gold.

Born in 1928, Domino was playing piano and performing in New Orleans honky tonks and bars by the time he was a teenager. The high school dropout kicked his career while at New Orleans Hideaway Club. He played the piano in local bandleader Billy Diamond’s band, Diamond nicknamed Antoine “Fats.”

The legendary singer became the voice and piano behind enduring hits like “Blueberry Hill” and “Ain’t That a Shame.” A contemporary of Elvis Presley, Chuck Berry and Jerry Lee Lewis, Domino was reportedly only second to Presley in record sales thanks to a titanic string of 11 top 10 hits between 1955 and 1960. He was among the first acts inducted into the Rock and Roll Hall of Fame. Fats Domino and his partner, Dave Bartholomew, made for one of the greatest team of songwriters. 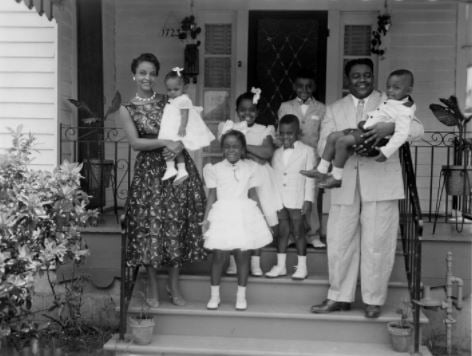 Domino continued to record and tour for decades after his initial success. He and his wife made news again in 2005 after his Lower Ninth Ward home was flooded to the roof during Hurricane Katrina.

At the time the couple had decided to stay as Katrina approached New Orleans due to Rosemary’s poor health. 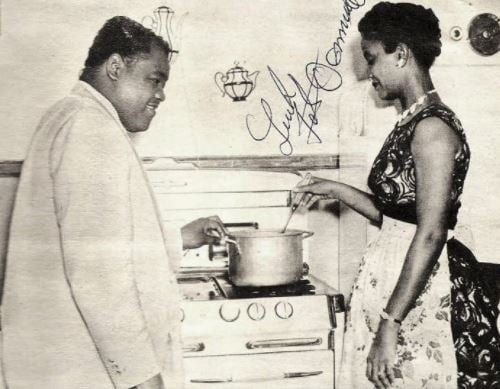 He and Rosemary Domino lived a quiet and private life in New Orleans. They owned a white mansion trimmed in pink, yellow and lavender. According to The Guardian, the front double doors opened into an atrium with chandeliers hanging from the ceiling and ivory dominoes set in a white marble floor.

The couple were rarely seen and Domino shunned publicity of all kinds. Following a health scare in the early 90’s while on tour in the U.K. he chose to live comfortably at home with Rosemary Domino and raising their children off the royalties from his earlier recordings.

Rosemary Domino was born Rosemary R. Hall on March 28, 1930 to parents Jackson Hall and Rita Hall. One of five, children she was raised in New Orleans, where she lived most of her life. She had three sisters, Eva, Katie and Arlett; and one brother, Jackson.

She and Fats Domino were married in 1948 until her passing. Rosemary Domino died March 10, 2008, aged 77. The song Rosemary by Fats Domino is believed to have been written for his wife.

Of her passing, one of the couple’s grandchildren said “He’s missing her,” “My grandmother was there for him every day, all day. Her presence is definitely missed.”