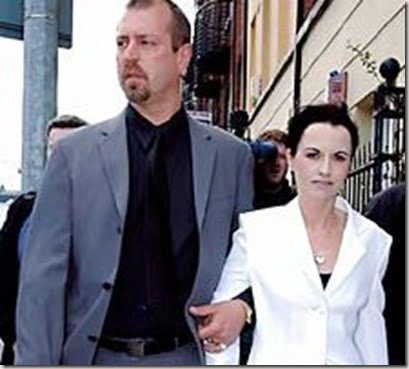 Don Burton’s wife, The Cranberries Singer Dolores O’Riordan is currently behind bars! As much as we would like to tell you some cool news about her on tour, or making a new album and working on new material, the 43-year-old singer is in whole lot of trouble.

Don’s wife was on a flight from New York to Ireland when she allegedly assaulted an air hostess! After landing she was detained at Shannon Airport in Ireland, the hostess who was taken to the hospital suffered a fractured foot in the incident. According to reports while the famous singer was arrested she head-butted and spat at an officer.

His wife of 20-year gained world fame after she joined The Cranberries while she was only in her teens, the band produced major hits, there was not a soul who didn’t own one of their records in the mid-1990s. 52-year-old Don is best known for being the former tour manager of English Rock band, Duran Duran. The couple tied the knot in 1994 and is the father of four children, three of them with Dolores. According to IMDb, he was in a previous relationship from which he fathered one child, a son named Donny. He was married and divorced. Burton was born on January 27, 1962 in Canada, he met his wife when The Cranberries and Duran Duran were touring together. They had a brief romance and they quickly fell for each other, she has a tattoo with his name on her right shoulder. Burton is nine-years her senior, after the couple tied the knot she as gone by the name Dolores Burton. As a result of their union, Don Burton brought the Cranberries over to Left Bank Productions (his company), and became the band’s manager.

On their wedding day the couple had a horse drawn, it was very romantic. They tied the knot at the Holy Cross Abbey in Tippery in Ireland. After their nuptials the couple lived in Ireland but by 1996 the couple moved to Canada.

After becoming a mother, Dolores was off the spotlight and focused on raising her family. In 2004 the couple had an incident involving their children’s nanny. Burton and his wife were ordered to pay heir former nanny £1,050.

Some online reports suggest, Don’s wife might have been drinking during the flight, but nothing has been confirmed. Do you think her hubby could have something to do with it?