Ciara the **** singer-songwriter, model and actress is having sleepless nights over her former man and baby daddy, rapper Future –who could be or not –threating her current beau, NFL star, Russell Wilson.

The 30-year-old “Goodies” singer is in fact so worried that according to gossip site, TMZ, she filed legal docs in her defamation lawsuit against Future, revealing a number of disturbing situations she believes could ultimately end with Wilson being killed.

Ciara describes the threats made against Wilson, as to when Future posted two football emojis with three gun emojis pointed at them (oh 2016, you’re the best). According to TMZ, Ciara also mentioned the hook to Future’s song “Juice,” that seemed to be referencing Wilson:

“Tryna (expletive) my baby mama, dog what’s up with you? You gon’ make me get that heat, I’m pulling up on you.”

Ciara claimed in the suit that Future’s threats are very real, “frightening” and “socially irresponsible” you know with all the gun violence going on.

Ciara was engaged to Future in 2013, the then couple welcomed son, Future Zahir Wilburn, on May 19, 2014. A few months after the birth of their child, the couple announced the engagement was off.

She has been romantically linked to rappers Bow Wow and 50 Cent, as well as NBA player Amar’e Stoudemire but that’s all in the past. 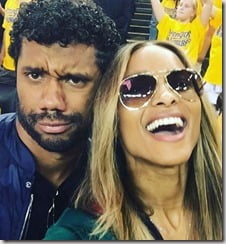 Future is said to have taken the news, well, not very good but from that, to making death threats? So he wrote some violent lyrics, but isn’t that what rappers do? Future who is a father of four including Ciara’s child, was awarded joint-custody of their son.

Future was born Nayvadius Wilburn in Atlanta, Georgia on November 20th, 1983, but that name has now been legally changed to Nayvadius Cash. 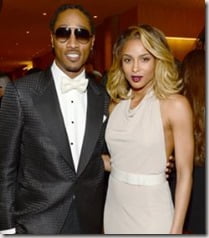 Future’s start in the music industry was from his songwriting. The first big music artist to pay attention to the Astronaut Kid was Ludacris back in 2004 after he gave him the hook for “Blueberry Yum Yum“, which is a song that can be found on Luda’s The Red Light District album.

Do you think Ciara should really be worried about her younger beau’s safety? Reports point out it’s not clear how Ciara’s latest claims are related to her February $15 million defamation lawsuit, which alleged Future’s “venomous tweets” and media interviews about their personal lives had damaged her career.