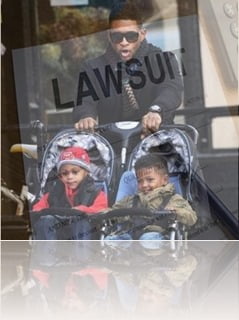 Singer and The Voice’s newest judge Usher is being sued by his former nanny Cecilia Duncan, according to TMZ Ms. Duncan is asking for an unspecified 6-figure amount for wrongful termination, failure to pay wages, and other damages after she was terminated from her job as nanny for Usher’s 4 and 5 year-old sons (Usher V, and Naviyd Ely).

Duncan claimed she began working as a part-time nanny for the singer in December 2010, during that time she would worked often exceeding 40 hours per week, without being paid overtime, she told Usher her concerns but he refused to pay her and ultimately fired her last September without the payment for all those overtime hours.

The two nannies with Usher and his children in the photo gallery below where taking during or about the same period of time where Cecilia Duncan worked for him.