Briana Jungwirth is the new mommy!!! Briana Jungwirth gave birth to her and Louis Tomlinson’s first child together, even though they are not really together. Last year we all met the girl seen with One Direction’s member Louis Tomlinson. According to the Daily Mail Briana is a stylist based in Los Angeles became pregnant with Tomlinson’s child, she gave birth to a boy on January, 22, 2016.

Miss Jungwirth just gave birth to one of the world’s most famous singers’ babies. Reports indicate the blonde and her former flame, Louis welcomed a baby boy.


A source close to the former couple confirmed the news, the Daily Mail reports. A friend of the singer told People: Louis is happy and very excited about becoming a dad and he thinks Briana will be an amazing mother,’
unfortunately the baby boy, won’t have his mommy and daddy together since Louis is already in a relationship with actress, Danielle Campbell.

Though the couple is not together, they clearly have make the baby their priority and it goes to show on Lois decision to move to Los Angeles and even getting a separate property for Brianna and their son.

Brianna who was very into her hairstylist career right before meeting the her baby daddy, has kept very private and out of the spotlight.

Join us in congratulating the new parents!

A source close to the story told the Daily Mirror “Louis is mainly in LA to work on 1D’s new album, but he’s also making sure he’s having plenty of fun.” His friend gets on with her friend, so they’ve all been hanging out together. He is young and single, so why not?”

Is certainly good to be an OD guy, and Louis certainly know how to have some fun. He recently faced some drama after he took a group of girls back to his hotel for a private in London.

The California girl is also said to be involved on fashion shoots in the Golden State. 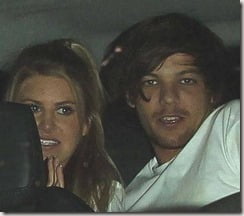 Not to many details are known about her but they are certainly not wasting any time; last Monday they were seen leaving together The Argyle in California, over the weekend  they were pictured after a night at Project L.A. in Los Angeles and third date they were seen leaving Snoop Dogg’s CD release bash in West Hollywood and most importantly, hands have been held! 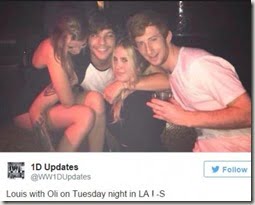 It’s obvious they have been talking and making planes to hang out in three different occasions now, they are both good-looking and enjoy each others company.

Do you see a future for Briana and Louis? Is he ready for another relationship? He was in a four-year relationship with ex- girlfriend Eleanor, was pictured kissing a gal in Thailand and just days ago he was romantically linked to Fifth Harmony’s Camila Cabello.

Briana Ashley Jungwirth Case was born in San Bernardino, California on January 26, 1992 to parents Jerry and Kathy Jungwirth (nee. Case), she has one older sisters Emily and Tonya, 37.

On July 14, 2014 it was announced Briana Jungwirth was pregnant with Louis’ baby, they are longer together but sources close to them said Brianna and Louis are good friends. He bought a house in Los Angeles  for him and another one for Brianna to live with their child.

Briana Jungwirth is the daughter of Joe Jungwirth  and Tami Clark, her father Joe who resides is South Dakota is married to singer Karen Lawrence.