English singer and songwriter Boy George has been in the music scene for decades. The now 54-year-old is still widely known as the lead singer of award wining pop band, Culture Club.

Boy George was born George Alan O’Dowd on  June 14, 1961 in Bexley, London, United Kingdom. He has 5 siblings and his father, the violently tempered Gerry O’Dowd, used to box. He hit all the family, including George’s mother, who he left after 43 years for a younger woman. He and George fell out, not speaking for many years. He died in 2004.
Boy George started his career as a cloakroom attendant at a local nightclub.

During the decade of the 80’s, at the height of the band’s fame, George set himself apart for his soulful voice and androgynous appearance. He was and is perceived as a supporter of “New Romanticism” movement. 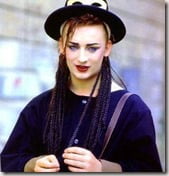 His 1990s and 2000s solo era, was very much influenced by the glam style, including his admiration for artists such as David Bowie and Iggy Pop.

He had added many credits to his professional life, from being a singer to songwriter, from D.J. to photographer, being successful in any aspect of his career.

His music was hugely praised as blue eyed soul due to its cherishing rhythm and reggae.

He gave back-to-back hits during 80s which made him and his band a trendsetters in the new romantic genre. “Karma Chameleon”, “Do you really want to hurt me” were massive hits along with “The War Song” which also added to their hits list. While singing with “Culture Club”, the band was awarded a Grammy Award and a Brit Award.

In 2006 Culture Club reunited but without George, and with a new singer. They never took off and George forgave them.

George has been sober since 2008. He now boasts of his great shape, his eating habits and his improved style.

Most recently Boy George has been keeping busy being a mentor on The Voice UK and will also be appearing on Celebrity Apprentice. 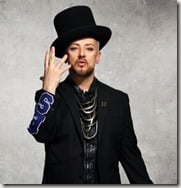 There was always much speculation about his sexuality, given Boy George’s appearance. Though he never denied he was gay, he also didn’t confirmed it. However in a 2006 documentary directed by Simon George titled “The Madness of Boy George” he declared on camera he was “militantly gay.”

Two years later, in 2008, in another documentary he talks about the moment he realized he was gay. In “Living with Boy George” he also tell of when he first told his parents. 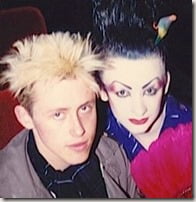 In George’s autobiography, “Take It Like a Man” he wrote about having secret relationships with punk rock singer Kirk Brandon and Culture Club drummer Jon Moss.

While Kirk Brandon sued the singer, Jon Moss is allegedly the center of many of Culture Club’s hits. 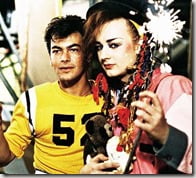 When the band started in 1981, George and drummer Jon Moss were lovers – the one gay affair, Moss says, in an otherwise heterosexual life.

The pair’s romance did not last, with speculation that Moss had broken off his engagement to a woman to be with George, but was never entirely comfortable in a homosexual relationship. Moss has since gone on to marry a woman and have several children.

In 2009 Boy George was sentenced to 15-month prison sentence for an assault on a male ****** two years prior. One interview, where he was asked about it, George stated it made him ‘cry my eyes out.’