Andy Biersack is the hunky and younger husband of singer and former Voice alum, Juliet Simms. According to reports the couple got into a heated argument during a flight to LAX.

TMZ reports, husband and wife were flying from Charlotte to LAX Sunday night when they started feuding. Things got so heated Juliet had to be handed to the FBI once they landed.

The 30-year-old was separated from her man, Andy Biersack after she allegedly punched him in the face.

However, the story apparently has a happy ending.

Juliet told TMZ, she and her husband are doing fine, they are cooperating with the FBI and blame the fight to her heavy drinking ways. 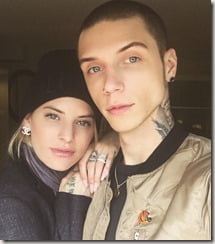 Andy Biersack was born Andrew Dennis on December 26, 1990. The 25-year-old is also in the industry as a badass rock singer and IMG model.

The Ohio native left school just days before graduating to follow his music career. He made the move to los Angeles two days after turning 18. 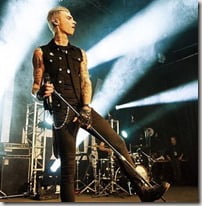 Andy is best known as the founder and lead vocalist of the rock band Black Veil Brides. He was named one of the top living rock stars in 2011. He was previously known as Andy Six but as of 2011 he decided to go with his birth name.

He was placed fourth on Kerrang’s list of the 50 Greatest Rock Stars in the World in 2012.

Earlier this year he released his first solo album title, The Shadow Side.

Andy who is four-years Juliet’s junior, married her on April 16. Juliet gained notoriety after nearly becoming the winner of Season 2 of “The Voice.”

Andy also describes himself in social media as an animal advocate. The newlywed is a long time fan of the Cincinnati Bengals. He has a strong social media presence, with over a million followers on Instagram alone.

When not doing his thing, Andy can be found hosting his own “The Andy Show” along with his cousin, Joe Flanders. The two sit down every week to discuss a myriad of topics including current annoyances, comedic insights and other facts.