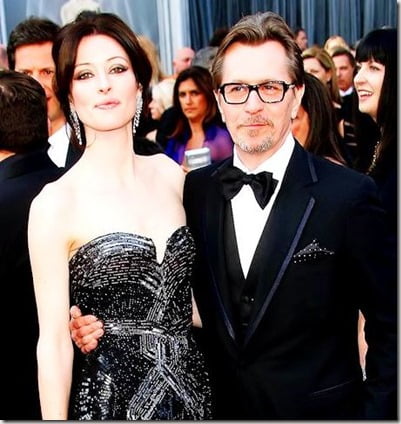 Pin According to recent reports, 36-year-old singer and actress Alexandra Edenborough’s husband, actor Gary Oldman missed the NY premiere of “Planet of the Apes” due to a family emergency. The actor who recently had a controversial interview in Playboy –where he express his sympathy for fellow actor Mel Gibson regarding his domestic violence history –is married to his fourth wife, British jazz/electronica vocalist, better known as Alex Eden. Pin Gorgeous Alex, his wife of six-years is 20-years his junior. She hasn’t been very active on social media, her last tweet was last January. The couple split their time according to their busy schedules but they reside mostly in their home in Los Angeles. Her hubby was previously married to first wife, English actress Lesley Manville with whom he had one son, Alfie. Second wife, actress Uma Thurman but the marriage ended two years later in 1992. He then wedded Donya Fiorentino with whom he fathered two children and whom things ended badly following a big fight. They divorced soon after she told police he hit her with a telephone and tried to choke her! Alex is an accomplished vocalist, cellist and songwriter: a U.K transplant who at an early age found herself in New York pursuing a record deal which led to a hit single that reached #1 in Asia. Alex’s vision for herself as an artist evolved naturally as she was influenced by artists as diverse as Madonna, Massive Attack and Nina Simone. She describes her influences as “Pre-Sunday lunch music listening with my father…huge catalogue of opera, classical, Beatles, Cat Stevens, Joan Baez ect. then a young girl got hooked and Madonna took over for a few years…onto Sade, Massive Attack, Everything but the Girl, Prince, Annie Lennox, Fleetwood Mac, U2, Tracy Chapman, Seal, Julie London, Sarah Vaughn, Nina Simone, Ella Fitzgerald” among others. Inspired by Alex’s words and melodies, Gary Oldman, has created and directed a visually lyrical video, in black and white, for “Kiss Me Like The Woman You Loved” Her husband and famous actor seems to have left in the past his days of violence. The couple who tied the knot in 2008 met while she worked as a waitress at a small West Hollywood eatery where Gary was a regular customer. At the time the actor said of his new found happiness

You know, it’s taken me a long time, but I have. I am happy. I had a few girlfriends over the 10 years before meeting Alex, but I never really let them in because you can’t have a conveyor belt of different people. You can’t keep bringing women in when you have kids. But when I met Alexandra I just knew. I knew with her that it would be OK.