Aimee Ann Preston is the new rumored gal pal of Aerosmith front man, Steven Tyler. The couple has been causing major buzz since the rumor began.

So it is not something out of this world that the rock star is dating a woman, but the major shock comes because Aimee Ann Preston is only 28-years-old, which makes her Tyler’s 39-year-old junior!

The couple stepped out in public recently and it appears they are not trying to hide their romance. They were spotted holding hands while attending Elton John AIDS Foundation’s Oscar Viewing Party on February 28.

We have to say, though the duo look more like father-daughter, Aimee Ann Preston is no stranger to Tyler. She is not some random chick he picked out of nowhere.

Aimee Ann Preston happens to be his long time assistant, so let’s say she’s been hanging with the rocker for a while and knows pretty much the ins and outs of his life and his lifestyle. In fact, according to E!, the pair made headlines in 2014 when the pair were spotted enjoying the sunshine and sands at Maui. Tyler and Preston were seen rocking their swimwear while getting in a little kayaking and having some fun in the water. 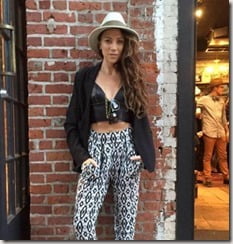 Aimee Ann Preston attended the Denver School of the Arts and is also an AMDA (American Musical and Dramatic Academy) alumni.

Accoridng to her LinkedIn, she works in the entertainment industry as the “Executive Assistant to Mr. Steven Tyler.” Aimee Ann Preston previously worked as personal assistant at the Trump Organization, for four years, from 2007 until 2011. She then moved on to XIX ENTERTAINMENT where she worked for nine-months.

She landed her gig with Tyler in October 2012. Since then, Aimee Ann Preston, has tagged along with the rocker to several events, so it wasn’t a big deal in the past.

Let’s keep in mind Tyler has been married twice and he was engaged to Erin Brady in 2013.

Do you think Aimee Ann Preston and Steven took their relationship from professional to personal?

You can find Aimee Ann Preston on Twitter here.