Abigail Anderson is Taylor Swift’s childhood friend, the same who went on a social media rant to stick up for her famous pal.

Anderson, a pretty red head, took to Twitter to say “I pray God helps your daughter understand, that despite how many times she’ll hear daddy reference all women as ‘b—-es,’ she isn’t one,”

Some might think Abigail might have gotten too far by dragging little North West into the feud.

She continued to say

“I pray she understands her father actually IS faithful to her mother, despite all the adulterous comments she will hear her father making. …I pray that she will understand ‘adultery and b—hes’ are just daddy’s form of art and not to worry because not every man thinks like him,”

“Lastly, I pray for forgiveness. May God forgive you & your wife for doing to others the very things you pray are NEVER done to your daughter.”

Abigail has since deleted the tweets, revealing she had received death threats as the reason to delete it. 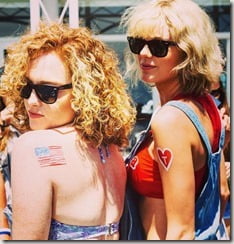 Abigail Anderson’s happiness sure was disrupted with her friends feud with Kanye reaching new levels, otherwise she would’ve kept celebrating her recent engagement. Anderson got engaged just a couple of weeks ago to her beau, Matt. 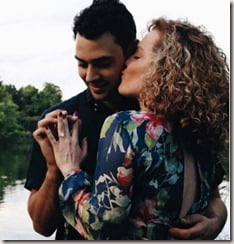 The blissful news was also shared by Taylor on her won Instagram account. Taylor revealed her friendship with Abigail during an interview with Oprah, saying they had met when she was 15. The then teens met on the first day of school freshman year, they sat next to each other in English.

Being the best girlfriend of a celebrity has its perks, that includes attending red carpet events with Taylor –like last year’s Grammy Awards; attending lavish parties at Taylor’s pad and well, getting to mingle with other famous people (Taylor’s boyfriends).

Abigail’s own Instagram has a following of over 300K and she is only a regular gal from Tennessee. Well, that’s not entirely true, Abigail Anderson has her own thing, and that’s being a kick *** swimmer. She attended Kansas University on a swimming scholarship –a dream she confessed to Taylor when they first met.

According to her LinkedIn, Abigail Anderson is an Office Manager at Angels Consulting Group.

Do you think Abigail’s tweet was off limits? Or, is she just a loyal friend?