Josephine Georgiou is the teenage concert goer that had her breast exposed by Madonna at a concert in Brisbane, Australia on Thursday for no apparent reason, she did sort of apologized in the only way Madonna could possible do.

Josephine Georgiou, 17, a stunning barista and aspiring model was invited on stage by pop icon Madonna were in front of a pack audience the Material Girl removed Josephine’s top off exposing her breast to the audience. Certainly, fans were shocked that Madonna’s unapologetic behavior. 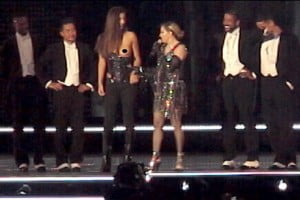 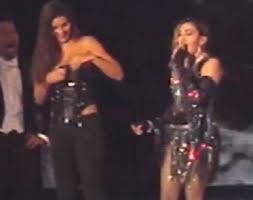 “Oh, s—. Oh sorry, sexual harassment. You can do the same to me if you like… you want to make my hole big again?” the mother of four said.

But Josephine Georgiou is standing by Madonna’s side in a recent interview Josephine mocked rumors that she may sue Madonna, revealing quote

“Seriously, why would I suer Madonna for the best moment of my life? It was the best night. She was calling mer a Victoria’s Secret model the whole time. I was on sage, which is so flattering.”

Josephine added that she wasn’t even offended by what happened saying.

“Only I Get to decide if I’m humiliated or not; why would people assume I am humiliated by my own breast, nipple or body?”

“It ‘s hilarious to me how much of a big deal it is to everyone, people just need to understand I was on stage in front of Madonna!!! I was looking her in the eyes and most people would just melt into a pool on sage, so it was only because I was standing in front of her that I looked so surprised.”

Josephine who is dating Pierre Valmage, 24, said she was wearing her mom’s leather concert at the concert where she saw Madonna spotted her in the crowd.

‘I swear I saw Madonna look at me and smile and like notice me and then talk to some guys on the side of the stage and then were looking at me,’ she said.

‘They looked like they were talking about me and then ten minutes later this woman said, hey, do you like dancing? Do you know this song? Madonna has a fan come up every show.

Madonna said Josephine was the kind of her you want to slap in the **** right before she pulled down her top, for Josephine that was it, no big deal except that Hello!! it was Madonna right next to her on stage!! No way she would have imagine the chaos that broke down the following day.

“It was so nothing to me. And then like this morning at work, my phone was blowing up. I was like, what is happening? It’s ridiculous to me it’s like, it’s such a big deal right now.”

‘It was seriously, nothing, I didn’t think of it until everyone totally freaked out about it. It’s so ridiculous to me I’m on TV for having a breast.”

Oh! well you know what they said, there is no such thing as bad publicity, just ask Kim Kardashian and Miley Cyrus!