Mr. Varsano is the lucky man married to the Israeli actress Gal Gadot who we all met from her role of Gisele Yashar in Fast and Furious and in the DC Comics film Wonder Woman.

Gal Gadot made her debut as Wonder Woman in the 2018 DC Comic film Batman vs Superman: Dawn of Justice, along with Ben Affleck and Henry Cavill.

What is Gal Gadot Real Name?

Sure I wondered myself that same question a couple of years ago, Gal Gadot sounds like a name her agent would have thought of, like Marilyn Monroe, Courtney Love, Spike Lee, Portia de RossiCarmen Electra, Lana del Rey, Olivia Wilde, Whoopi Goldberg, Bruno Mars, Helen Mirren, Jamie Foxx, Katy Perry; and the list goes on and on.

However, you should know her dad’s surname was Greenstein; he changed it before Gal was born. 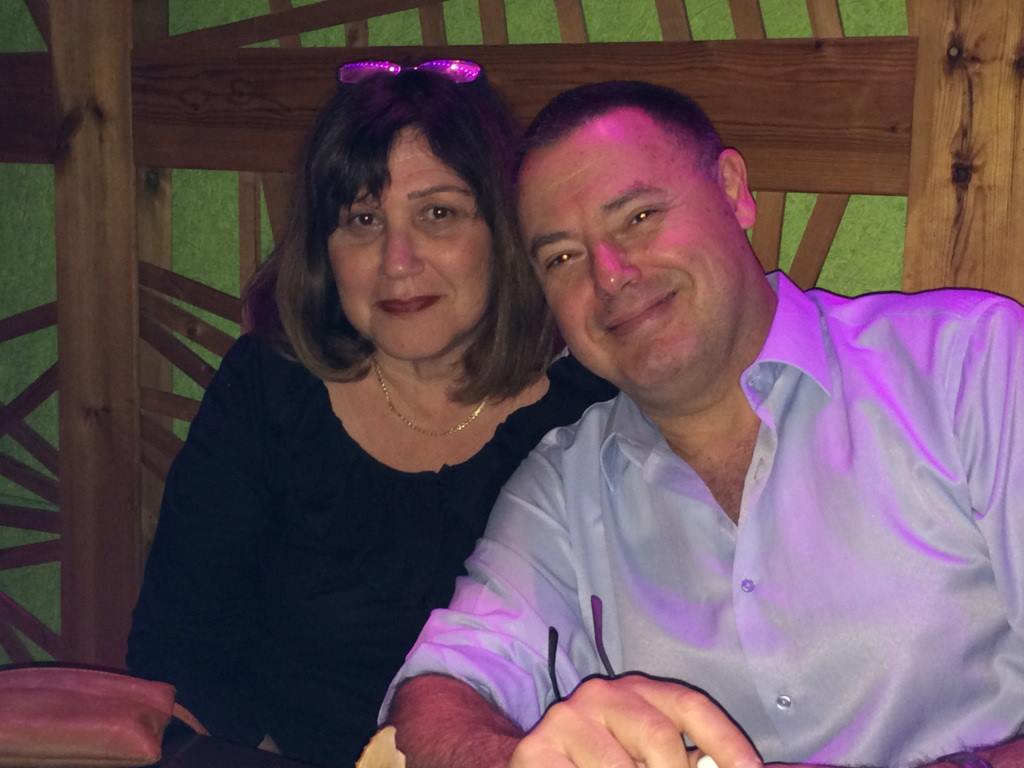 Gal Gadot was born to Jewish immigrants from Austria, Czechoslovakia, Germany, and Poland in Rosh HaAyin, Israel on April 30, 1985. They raised Gal and her younger sister in a Jewish, Israeli family environment. 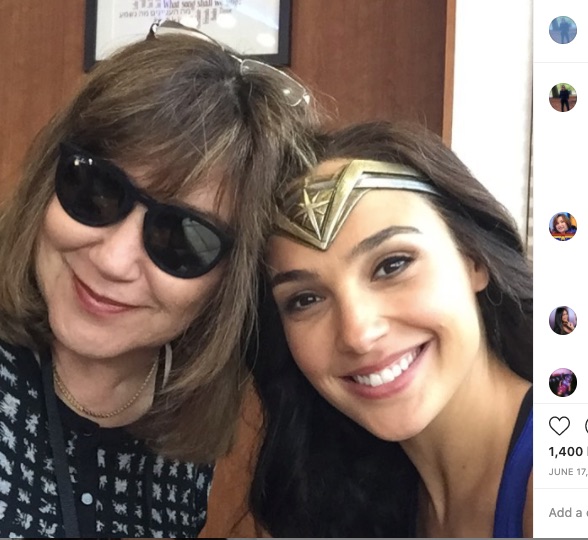 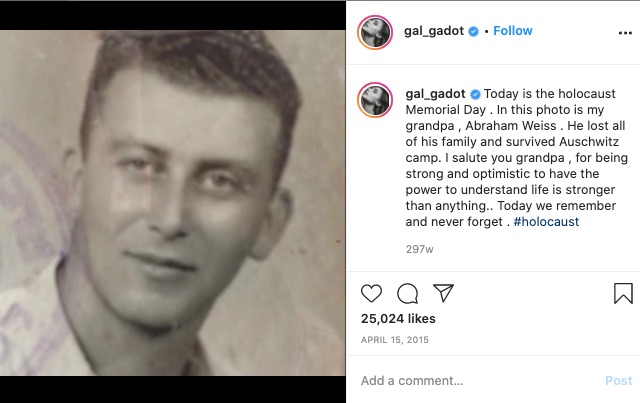 Irit Gadot”s family escaped from Europe,  her dad Abraham Weiss survived the Holocaust after he was imprisoned in an Auschwitz concentration camp, her mom ran away before the Nazis invaded her hometown. 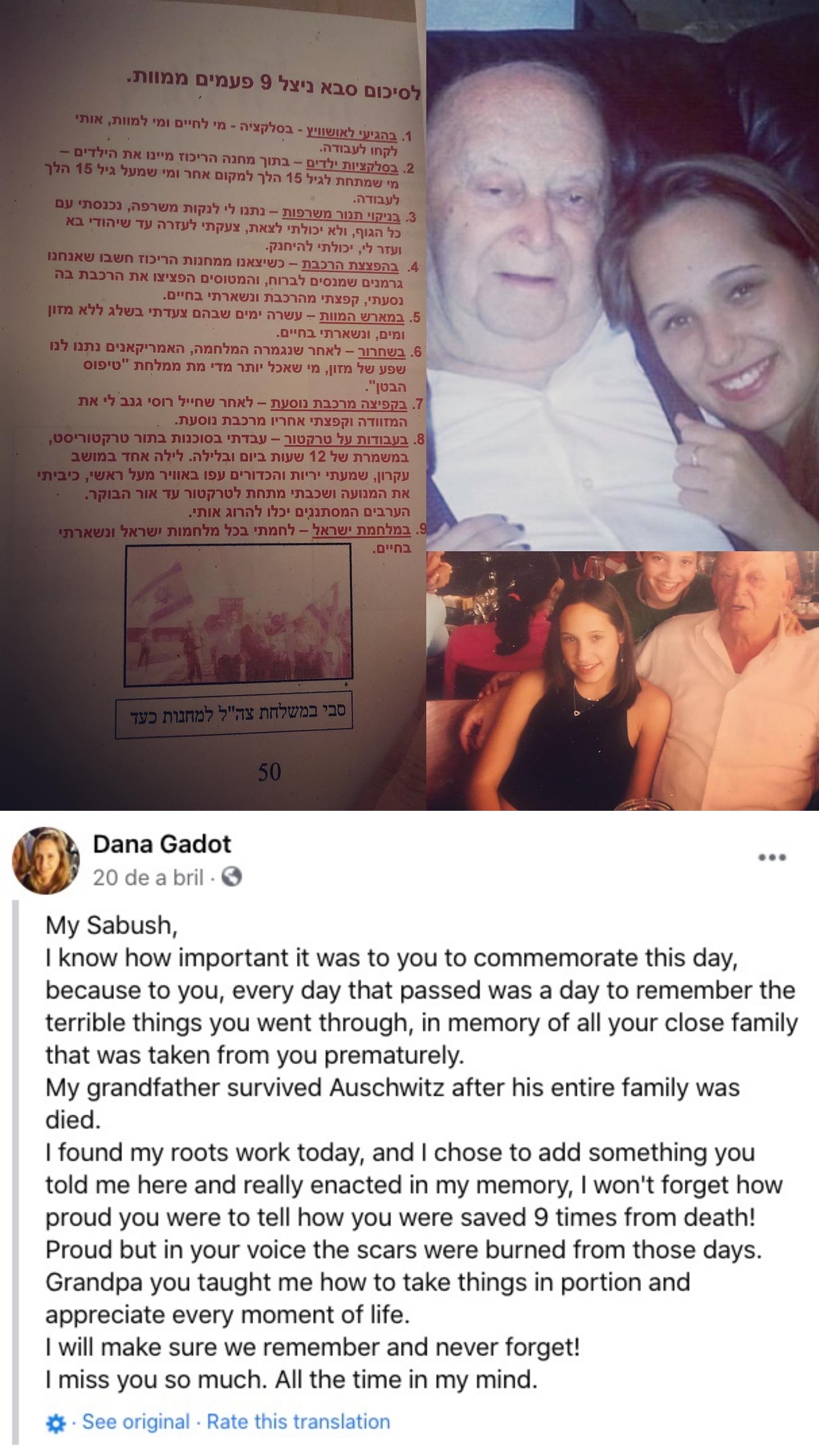 He was a senior production plant manager for the Israeli Military Industries from 1988 to 1993; worked for Eastman Kodak as a suppliers quality manager from 1993 to 2007. After that was a vice-president at MTI Wireless Edge until 2011 when he joined Siemens Wind Power (suppliers & Material quality manager).

Gal has one younger sister Dana Gadot, born on January 9. You probably have seen the times Gal wished her baby sister a happy birthday on that same day, but not sure about her exact age. 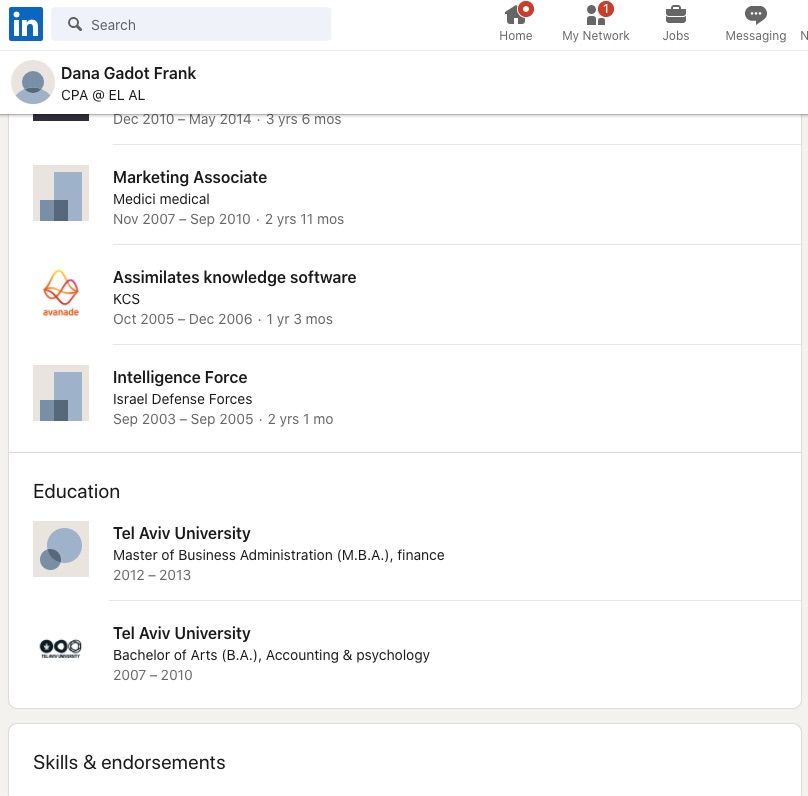 Some sites claimed Danan Gadot studied psychology and works for an airline in Israel; that is however not Gal Gadot’s sister Dana but Dana Gadot Frank, married to Assaf Frank she has no relationship with Gal whatsoever. 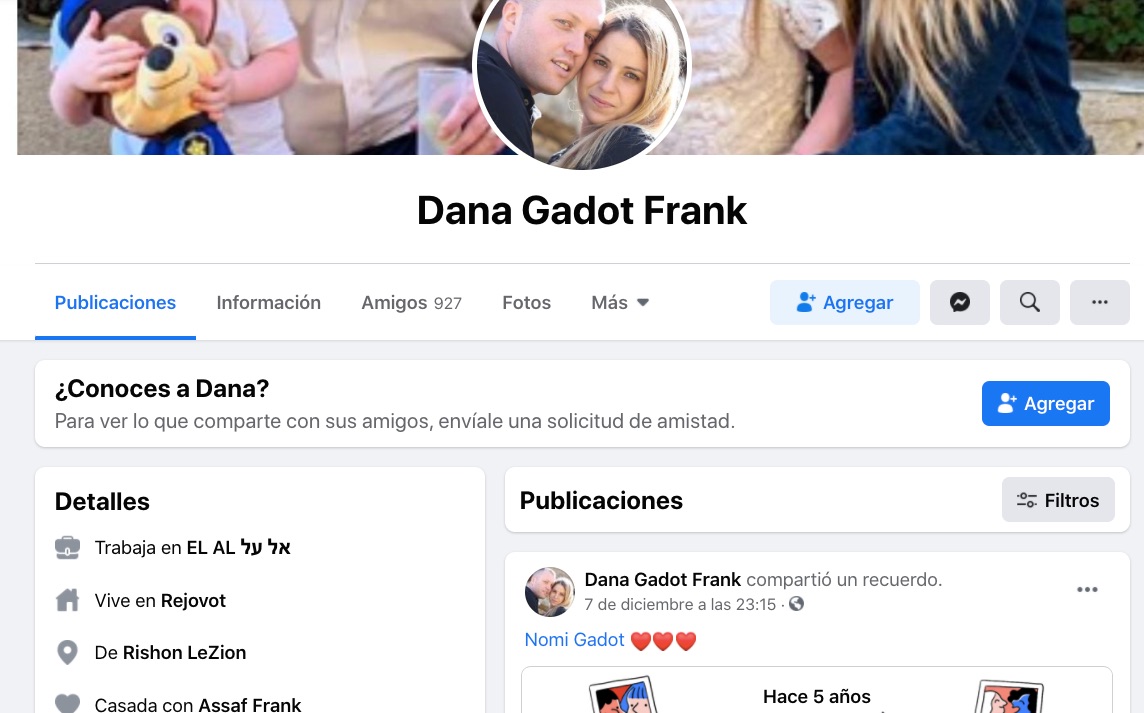 Gal’s baby sis Dana Gadot graduated from college in 2019. Some sites alleged she studied Psychology at the Interdisciplinary Center Herzliya, in Herzliya, Israel, where Gal once studied at. 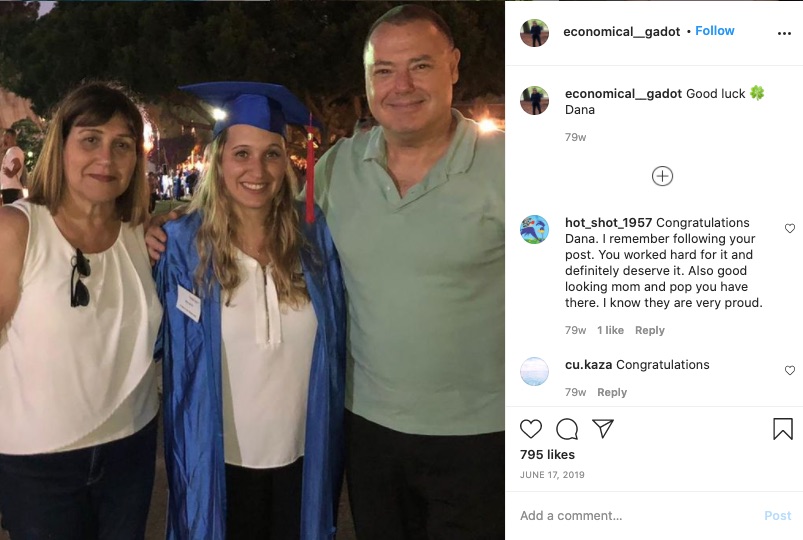 The statuesque 5’10 Gal couldn’t pass on a chance to compete at the 2004 Miss Israel competition which she won at the age of 19; she didn’t do good at the Miss Universe pageant in Ecuador the following year, but she continued to be a model in Israel. 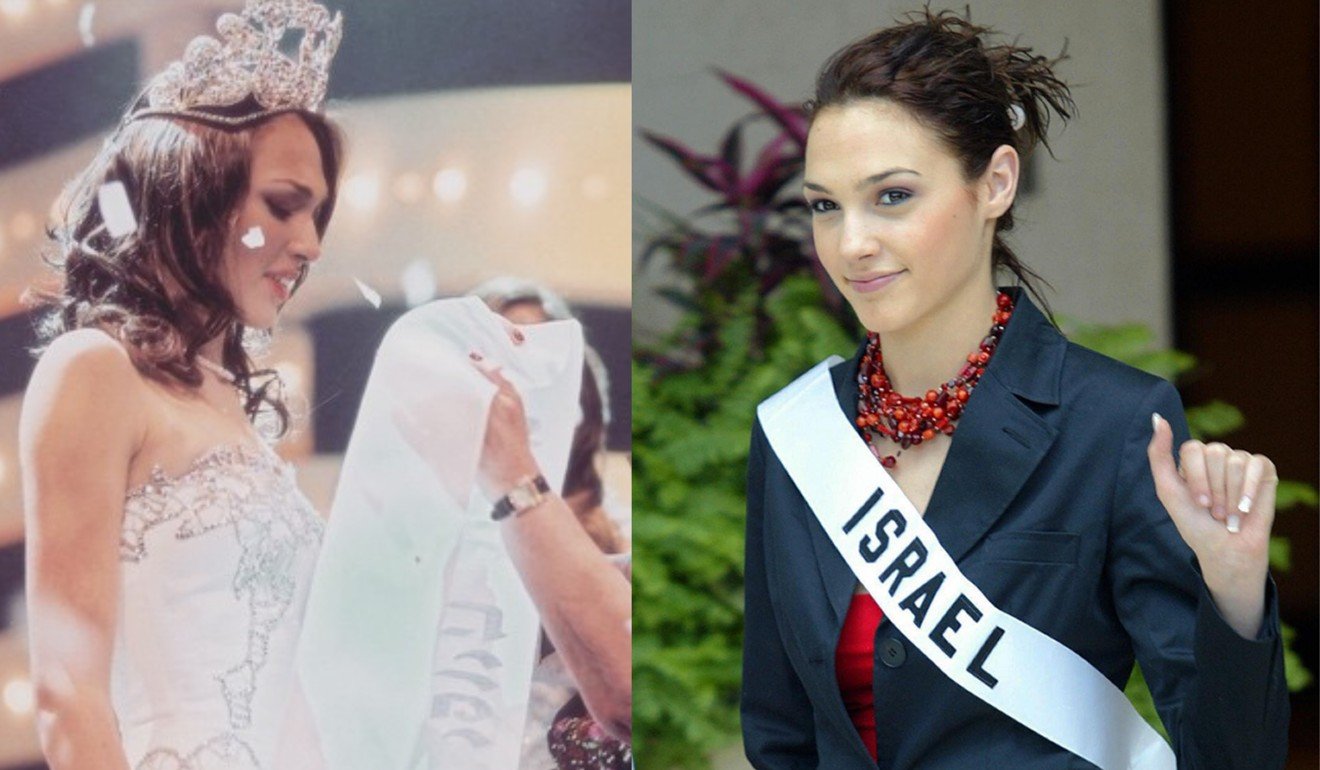 Gal Gadot’s time with the Israeli Army was when she was 20;  she served two years as a sports trainer in the Israel Defense Forces. 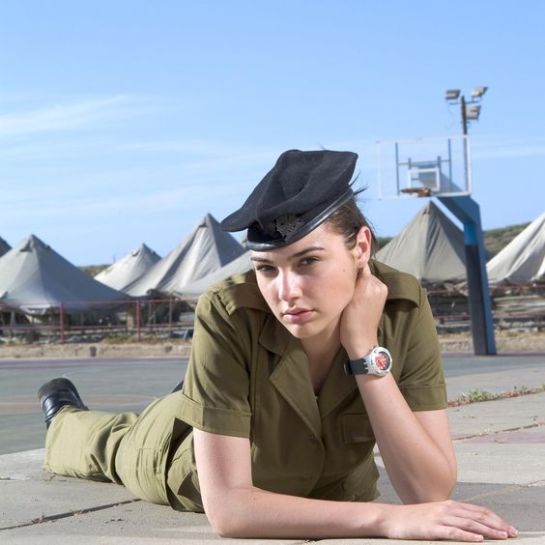 She began her career as an actress in television starring as Miriam Elkayam in the 2007 drama Budot and Lisa in Entourage in 2009; the same year she appeared next to Vin Diesel and Paul Walker in Fast and Furious. 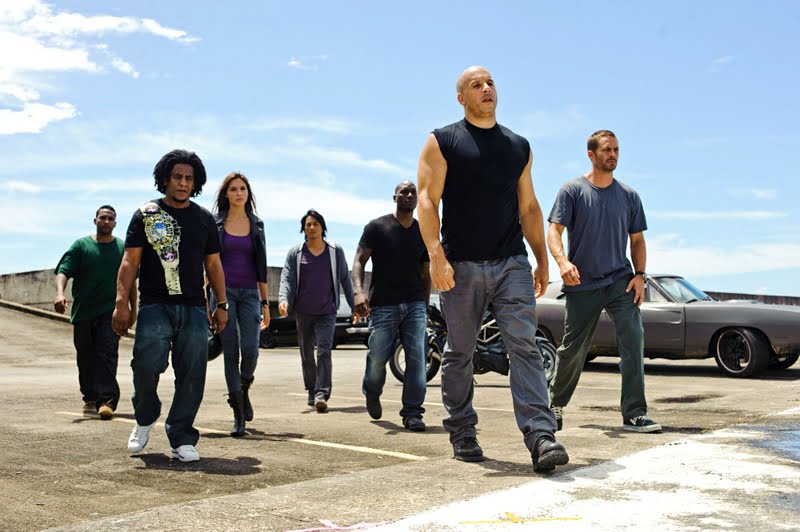 In 2010 has a small role in Knight and Day along with Cameron Diaz and Tom Cruise, in 2011 she returned to her role as Gisele Yashar in Fast Five and then again in 2013 in Fast & Furious 6. 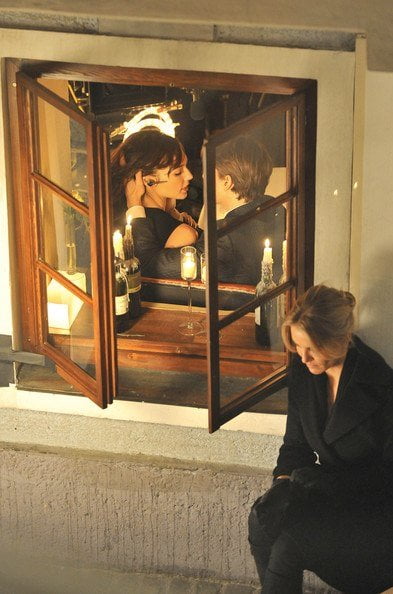 35-year-old Gal Gadot beat Elodie Yung and Olga Kurylenko for the role of Diana Price/ Wonder Woman; fans were furious when they learned that Ben Affleck would be the new Batman. Gal received the same treatment when casted to appeared on  Wonder Woman; many think she is too thin to be a seductive heroine. But she sure proves them wrong!!

Gal is facing something similar now that she has been selected to play Cleopatra in Patty Jenkins’ new film.

Critics think Cleopatra should be portrayed by an Arab actress; Gal responded with the following statement.

“First of all, if you want to be true to the facts, then Cleopatra was Macedonian,” the Israeli actress said in an interview Tuesday with BBC Arabic. “We were looking for a Macedonian actress that could fit Cleopatra. She wasn’t there, and I was very passionate about Cleopatra.”

Yes, as you all know Gal Gadot is married.

According to Jaron, he met Gal at a party in late April or early May 2006. They started dating almost inmediuatly. 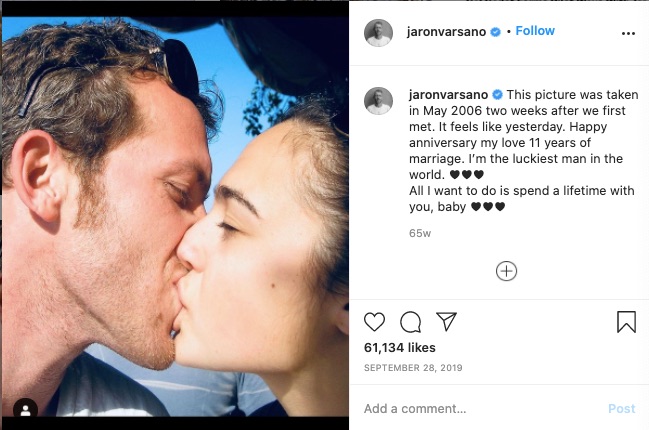 She was going thru the filming of her first Fast & Furious movie when she got married to her handsome boyfriend Yaron Varsano on September 28, 2008; after two years of dating. 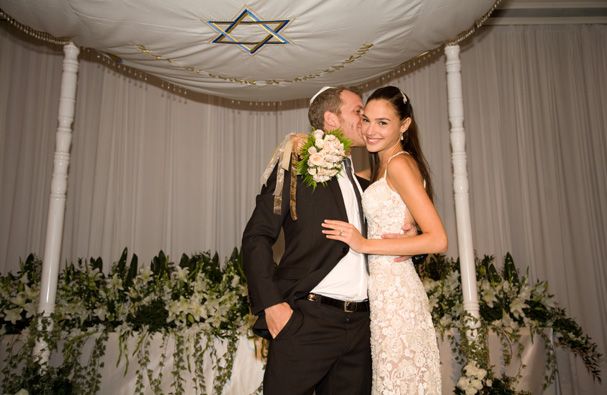 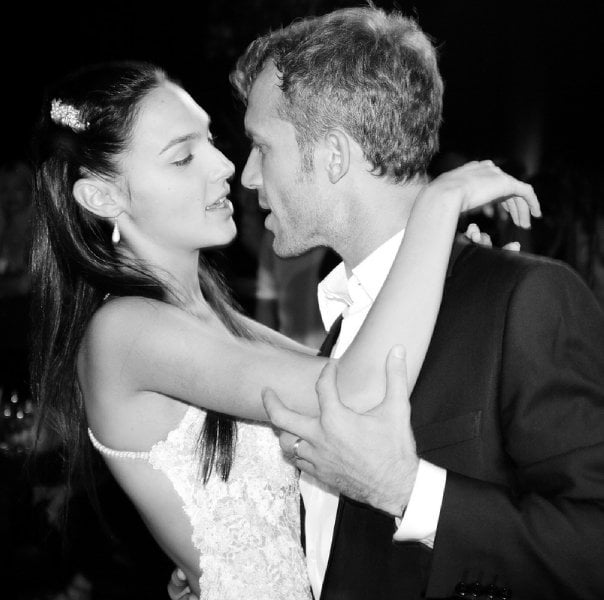 Gal Gadot husband Yaron Varsano stands at 5’11 (180), he is 45years old, 10 years olderthan his famous wife; but his name is Jaron Varsano, althought you all are probably more used to Yaron Varsano, therefore he was born on  June 28, 1975, in Amsterdam to Israeli-born parents Irit Varsano and Daniel Varsano an Israeli/Dutch hotelier. Varsano has one brother name Guy Varsano. 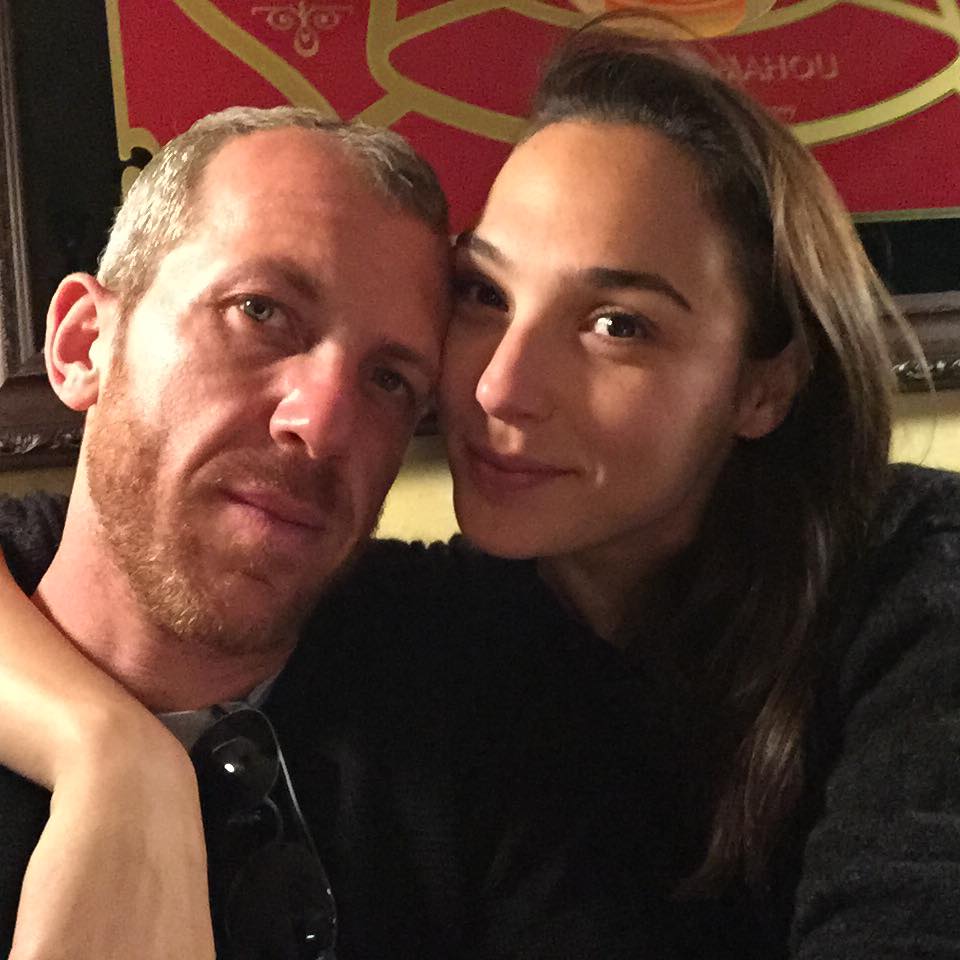 Jaron’s dad, Daniel bought the Chelouche house in Neve Tzedek for $4 million in 2001; Daniel and Guy Varsano founded their company Mediterrenee in December 2000.

Gal Gadot’s husband attended the International School of Amsterdam; subsequently  graduated in 2000 from the New York Institute of Technology.

Yaron Varsano’s has a net worth estimated at #30 million; he along with his brother Guy owned a real-estate company, and a hotel in Neve Tzedek, Tel Aviv called the Varsano an Urban Oasis.

In 2015, Varsano sold his hotel in Tel Avid, for $25 million to Roman Abramovich, the Russian billionaire who is also owner of  Premier League team Chelsea F.C. and who is 2018 went thru a riculouusly expensive divorce from his third wife Daria. 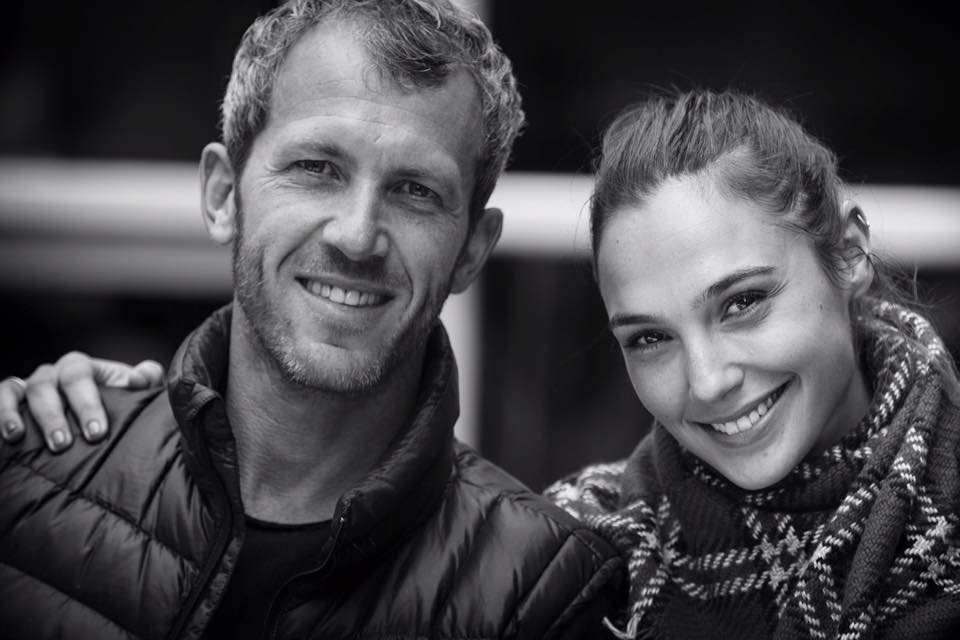 We produce powerful storytelling that creates momentum in TV and film. We bring the perspectives and experiences of unique people, to guide new themes in society with stories that inspire and ignite the imagination.

Brought to you by Gal Gadot and Jaron Varsano, Pilot Wave production company believes in cinematic creativity for growing a new sense of belief in the drama of mankind. Our productions recharge people with respect towards their own role in life, and empower their personal narrative within the fabric of community.”

You probably know that Gal Gadot has two beautiful kids with her husband Jaron Varsano, Alma and Maya Varsano. Let’s meet these cuties.

Firstly , let me tell you that oine of the million amazing things about Google is that it understands your spelling errors, either Yaron Varsano or Jaron Varsano it takes you to the right place and the same applies when it comes to Gal Gadot kids Maya Versano or Maya Varsano, Alma Varsano or Alma Versano.

Between you and me I think Google’s acceptance towards  our misspelling actually makes us lazy! why bother learning the right way to write it down when Google still gets us!

Anyways, Alma Varsano was born on November 5, 2011. Gal once said it was thanks to Alma that she realized how important are female rolemodels and female superheroes for girls.

“The prince is always so brave and courageous and strong” the Princess  always fall asleep and then the prince is the one to wake them up,”

It made me feel really good about playing Wonder Woman,” said Gadot, adding that boys have “always had Batman and Superman and Spider-Man.”

“It’s really important to have that role model,” said DeGeneres, agreeing. “Now we have Supergirl on television and Wonder Woman,”

Continuing with the spelling error, with little Maya Varsano, not Versano! This little princess was born on March 20, 2017. 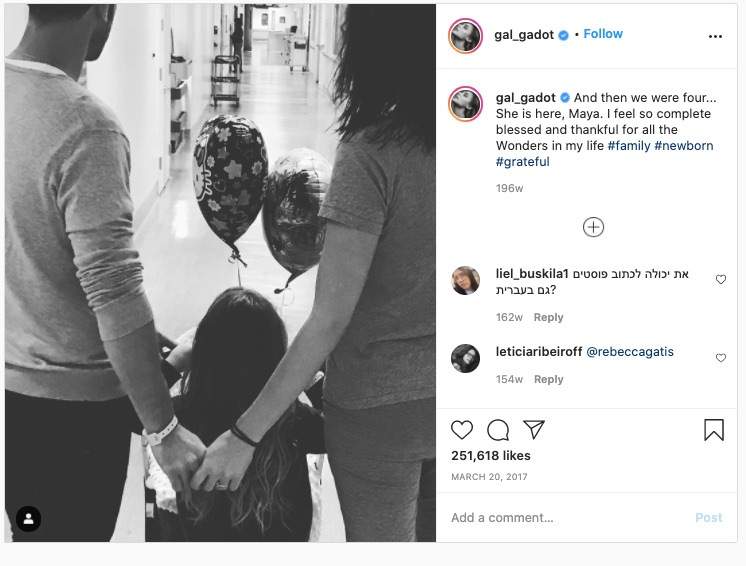 This cutie stuff muffin made her debut on her mom’s social media on November 6, 2016; when Gal posed with husband Jaron to announced Maya’s pregnancy. 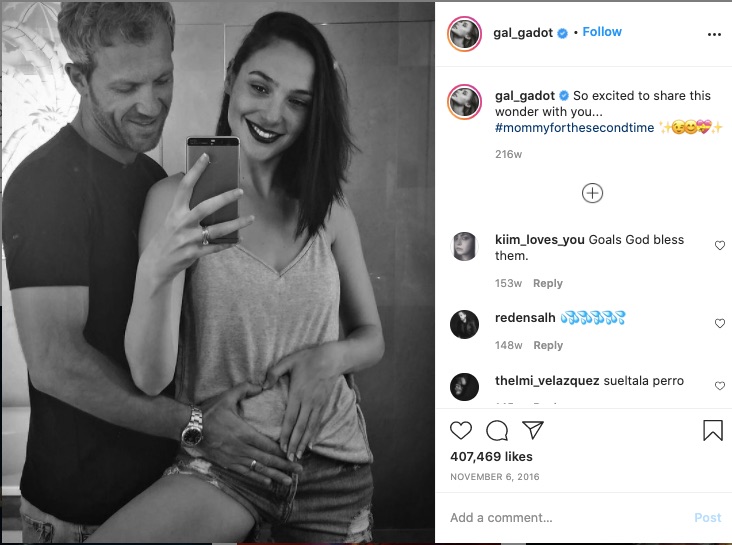 Gal was looking pretty pregnant with Alma at the 2018 Golden Globes, but she looked awesome!! 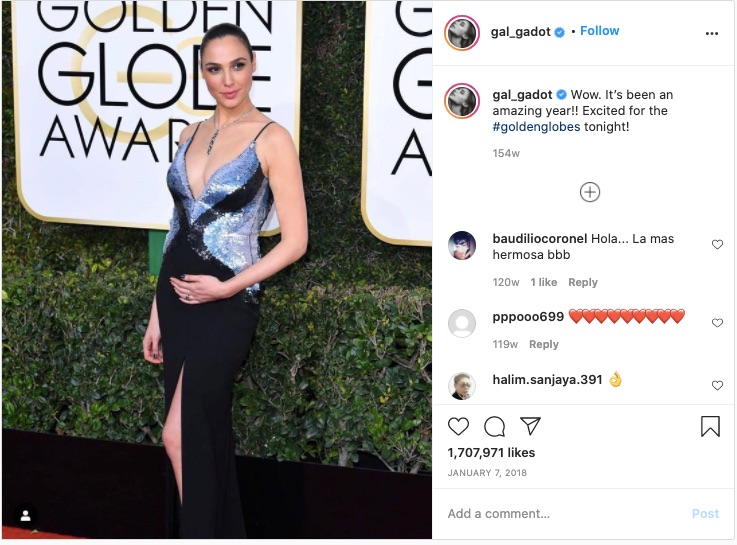 Not only Gal Gadot’s husband Yaron Varsano made a small cameo on her new film Wonder Woman 1984;  she was overjoyed that along with Yaron, both their daughters Alma and Maya had theirs as well.

It meant a lot; especially in that very special scene. I have two daughters, both of them appeared

To have them captured in the film with me; because they are a part of it, meant a lot, and it’s an amazing, amazing souvenir that we will forever cherish. 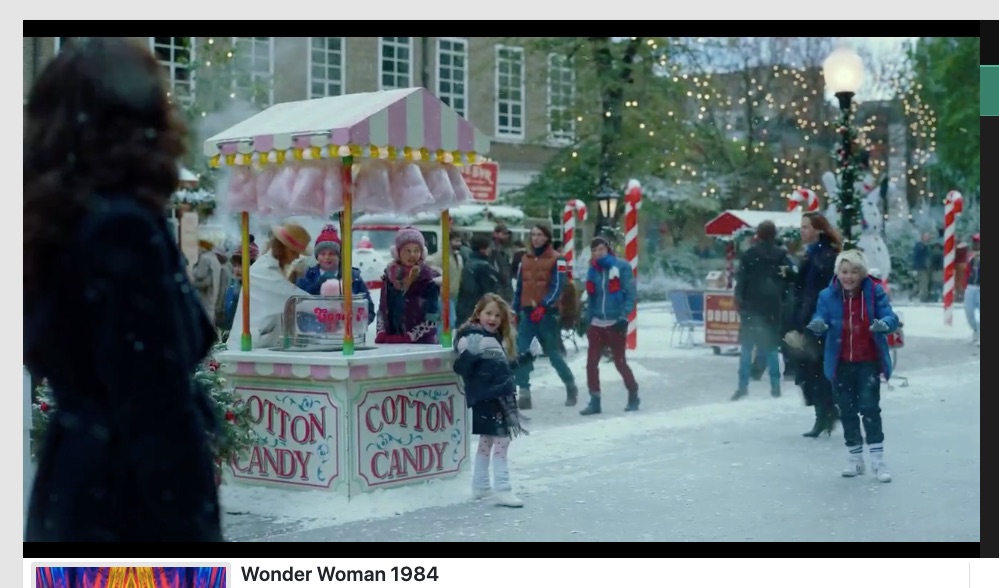 Moreover, Maya was in a carrousel with Jaron Varsano in the end of the film. 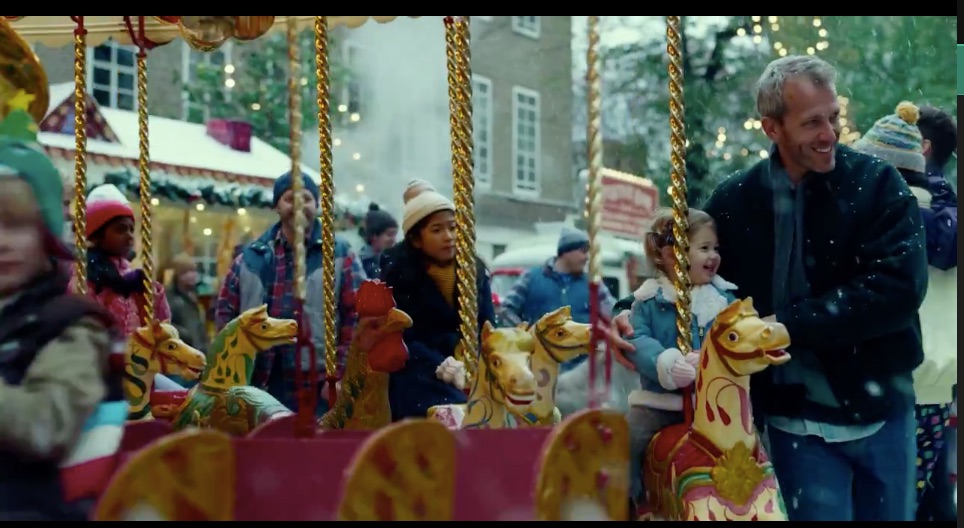 As a matter of fact, Gal and Jaron Varsano’s youngest kid, Alma made her acting debut inside her mommy’s tummy; Gal was actually five-months pregnant while filming the first Wonder Woman film.