Jon Peters, a veteran Hollywood personality best known as a movie producer -is said to be the newest husband of Playboy icon and actress Pamela Anderson.

Peters, a movie mogul and the former Baywatch star dated over 30-years ago and were reunited in recent months -which culminated in a private ceremony in Malibu on Jan. 20.

The marriage marks the fifth for both. Anderson’s exes include rocker Tommy Lee, with whom she has two adult sons; Kid Rock; and Rick Salomon (twice). Most recently, she was living in Marseille with French soccer star Adil Rami.

As for Peters -all of his previous marriages ended in divorce. He was first married to Henrietta Zampitella from 1962 until 1966. He then married second wife actress, Lesley Ann Warren with whom he had one son, Christopher Lind Peters. Jon and Warren were married for ten years until 1977.
He also was married to producer Christine Forsyth-Peters -the mother of his two daughters Caleigh and Skye. He divorced Christine in 1993 after six years of marriage.
In 2001, he married fourth wife, Mindy Peters, the mother of their daughter, Kendyl. They also ended in divorce in 2004. 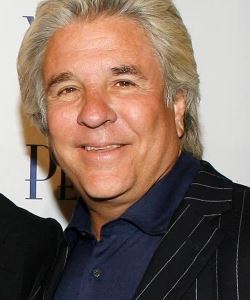 Born June 4, 1945; the California native first made a name for himself entering the family business as a hairdresser. He made millions selling salon merchandise and amassed a huge celebrity clientele at Jon Peters Salon on Rodeo Drive.
A friendship and years long affair with Barbara Streisand and his many industry connections led him to be credited as a movie producer with his first film being, the blockbuster -A Star is Born in 1976. He went on to produce a string of best-selling Streisand albums, “The Main Event”, The Eyes of Laura Mars” and “Caddyshack”. At the same time, he blossomed into an A-list producer, forming alongside Filmworks exec Peter Guber – Polygram Productions, later renamed the Boardwalk Company in the 80’s.
Films under his belt include Missing, Flashdance, The Color Purple, Witches of Eastwick, Gorillas in the Mist, Rain Man and more. Peter who was also a Sony exec, also started Peters Entertainment which has produced such blockbusters as Batman Returns, Wild Wild West, Ali, and Superman Returns.

Peters met Pamela or Pammy as he likes to call her, when she was 19. The two ended up living together and he paid for her acting classes and dance and voice lessons, helping launch her career. He popped the question then, but was turned down.