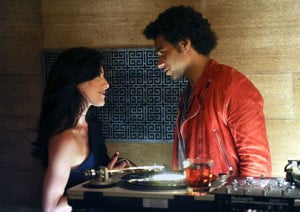 Corbin Bleu has been linked to many gorgeous women, among Monique Coleman, Maiara Walsh, Maddie Cyrus, Keke Palmer and Makeshia Lucien, but who is Corbin Bleu’s girlfriend, now? Is she the one in the DWTS season 17 contestant?

I think none of the above but Jamie Murray the one!

Jamie was born 21 July 1977 in London, England. She is best known for Hustle and Dexter.

Her father is the English actor Billy Murray. She was named after Jaime Sommers in The Bionic Woman, she was diagnosed with dyslexia. She studied philosophy and psychology in London School of Economics and train at the Drama Centre London in 2000.

Murray’s first taste of stardom was miming the lyrics in the 1996 original video of Stretch & Vern’s dance track “I’m Alive”.